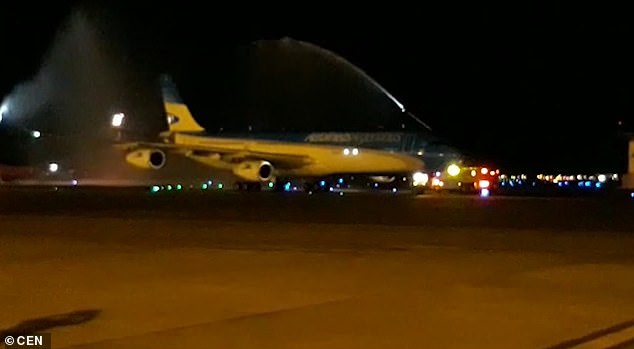 This is the moment a pilot's final flight celebrations end in catastrophe when he ploughs his left wing into a fire engine spraying water over the aircraft.

The plane was coming into land at Buenos Aires' Ezeiza airport from Madrid in Spain.

For the captain's retirement the plane was doused in water by two fire engines with their sirens going, but as he swung it round the runway his wing clipped one of the pumps.

Scroll down for video

Before the accident, the captain's final landing looked spectacular as jets of water streamed through the night sky, lit up by the runway lights

Flight AR 133 landed safely and two fire engines were organised to spray water over the Airbus 340-313 as it made its way into the terminal.

In the video, the plane can be seen driving under the streams of water when the pilot clatters into one of the fire engines' pumps.

Photos show the tip of the plane's wing was ripped off in the incident.

According to the Group of Investigations of Air Civil Accidents, the agency in charge of the investigation of air accidents, nobody was injured and the damage to the wing was not considered serious, but the plane will remain grounded temporarily.

The aircraft is reportedly 22 years old and will have to be repaired before going back into service.

According to company sources, the event is being investigated in order to know if the pilot made a mistake or if the fire service were responsible.