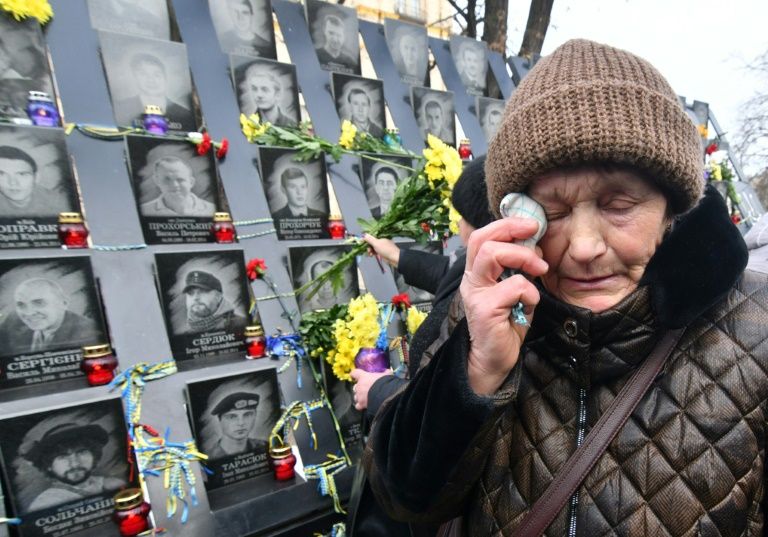 Hundreds of Ukrainians on Wednesday marked five years since the Maidan revolution, which ousted a pro-Moscow government but sparked war in the east of the country and led to Russia annexing Crimea.

President Petro Poroshenko and senior members of the government laid candles at a temporary memorial for the "Heavenly Hundred", as those who died during the protests are known.

Other members of the public brought flowers to the emotional event.

"The best ones died here," said 63-year-old Volodymyr Kyrylenko, who took part in the demonstrations on Kiev's central Maidan Square.

"But life continues and it will get better," he told AFP.

A wave of demonstrations began in November 2013 after pro-Kremlin president Viktor Yanukovych pulled out of negotiations to sign an EU association agreement.

The pro-Western uprising led to his ouster in February of the following year.

Russian troops and pro-Moscow forces then began seizing ports in the Crimea peninsula, before residents there voted to join Russia in a referendum that Kiev and the West did not recognise.

Pro-Russian separatists then declared new "republics" in Eastern Ukraine. More than 10,000 people have died in the ongoing conflict in the region.

Ukraine and its Western allies accuse Russia of instigating the separatist uprising and pouring in arms and troops.

Russia denies the charges despite considerable evidence of its involvement.