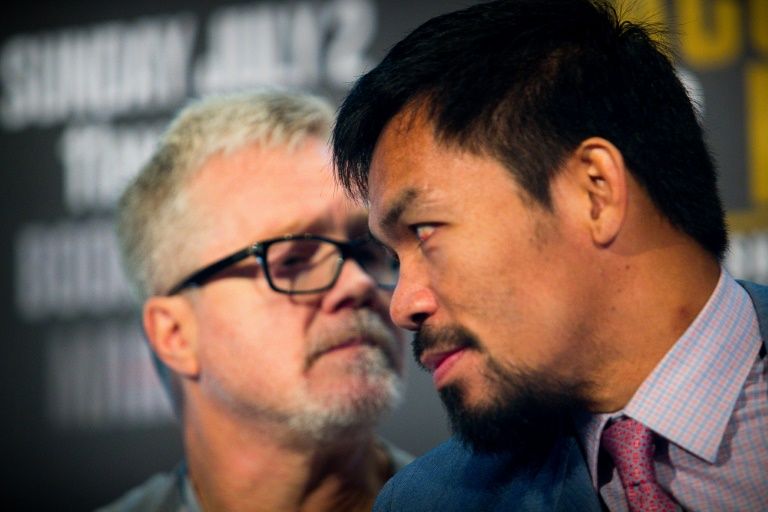 Veteran trainer Freddie Roach has agreed to reunite with Manny Pacquiao for the Filipino fighter's bout with Adrien Broner in January, it was reported on Wednesday.

A Sports Illustrated report, citing a text message from Roach, said he had agreed to work with Pacquiao again following late-night talks with the fighter on Tuesday.

"Manny reached out directly," Roach was quoted as saying. "We sat together one-on-one. I'll be in his corner Jan 19."

Roach and Pacquiao split abruptly after a 16-year partnership following the Filipino's defeat to Jeff Horn in 2017.

Roach was reported to have been upset by his dismissal, and was caught by surprise when Pacquiao announced on Monday that he planned to rehire the trainer for his January 19 fight in Las Vegas against Broner.

At that point, the two had apparently not talked since 2017.

"I'm not going to make a move until Manny calls me. I've been like a father to Manny for 15 years. If he can't call me, there will be no deal."

Speaking at a media roundtable in Los Angeles on Tuesday, Pacquiao said he hoped Roach would work in a supervisory capacity, with long-time associate Buboy Fernandez taking the lead role in training.

"I don't have any problem with Freddie Roach," Pacquiao said. "All I say is that I think the other work in training should be assigned or designated to Buboy.

"Freddie can supervise or instruct Buboy, this is what we're going to do," the 39-year-old added.