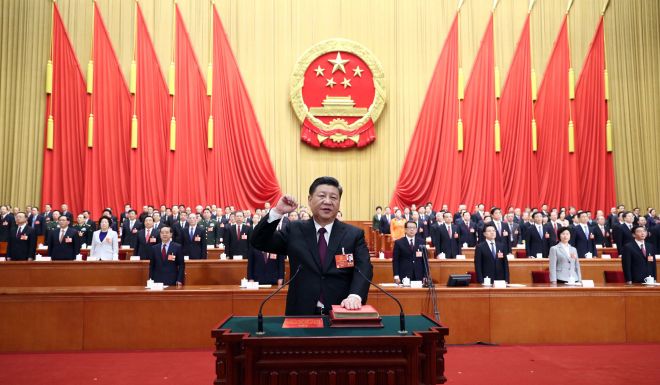 Political mistakes are costly in China: not only for Communist Party officials, but for the editors of its official media.

Two Shaanxi Daily editors received fines of 10,000 and 5,000 yuan (US$1,441 and US$720) for allowing three extra Chinese characters into the 16-character political philosophy of President Xi Jinping.

An editor, Liu Hui, added the words “Zong Shu Ji” – meaning the General Secretary– to the official term “Xi Jinping Thought on Socialism with Chinese Characteristics for a New Era”, in a story about a meeting of the Shaanxi Artists Association, on November 15.

The proofreading team spotted the mistake on the morning after the editor in charge, Wang Gehua, had approved the page for publication.

In an internal memo obtained by the South China Morning Post, the paper’s staff appraisal office termed the decision to add the characters a “major political error”. As the editor in charge, Wang received the larger fine of 10,000 yuan. Liu was fined 5,000 yuan.

Set on 14 basic points and wrapped in dense terminology, Xi’s thought is a nationalist appeal to restore China to greatness – a “Chinese dream” of rejuvenation that Xi first introduced in October 2017, when he opened the twice-a-decade 19th party congress with a three-hour speech.

At the end of the session that also marked the start of his second term, Xi’s ideology, along with his name, were written into the party constitution – making him just the third leader after Mao Zedong and Deng Xiaoping to have his name attached to an official philosophy.

Since then, slogans promoting the ideology have filled posters and billboards in cities nationwide. School pupils have been told to “plant Xi’s thought in their minds” and dozens of research institutes have been set up at top universities to study the doctrine.

Editors of official media have been summoned to study sessions organised by the party’s propaganda department to learn about the leader’s latest thoughts. When mentioning the doctrine in news reports, they are required to reproduce it in its full 16-character form – nothing more or less.

A simple guide to Xi Jinping Thought? Here’s how China’s official media tried to explain it