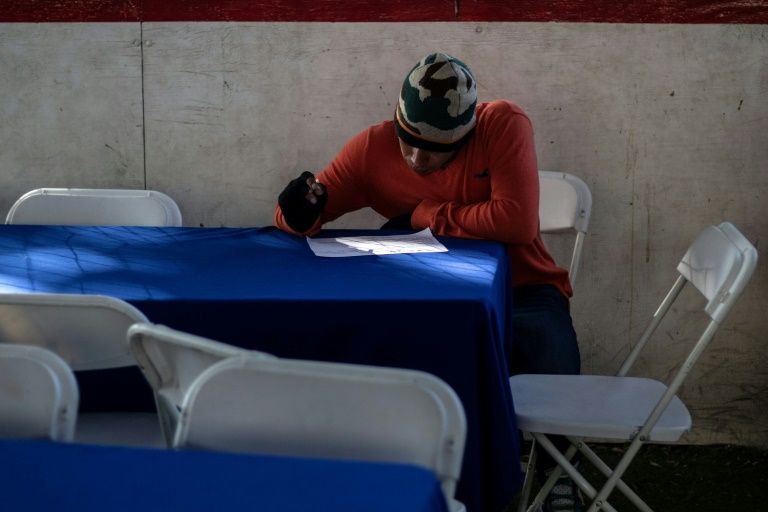 Need urgent deliveries? We can do it in 1 hr!
5 star aircon cleaning service as low as $40!

They're not just migrants, they're builders, cooks, painters and seamstresses: the caravan of Central Americans gathering at the US border boasts an attractive workforce and Tijuana, their last stop before California, wants to tap it.

Under a white awning near a packed shelter in a poor neighborhood of commercially bustling Tijuana, hundreds of the migrants line up for a job fair staged just for these determined travelers.

Since setting out more than a month ago from Honduras, they have covered about 4,400 kilometers (2,700 miles), either walking or hitchhiking, until several thousand reached Tijuana, Mexico which is just across the border from San Diego, California on their journey seeking a better life in America, whose President Donald Trump has deployed soldiers to help stop them.

"These are very strong people. They are a valuable workforce for our industry," said Nayla Rangel of the National Employment Service and director of the job fair, which will last a month.

Companies advertise job vacancies and interview candidates, while migration authorities and officers of the Mexican Commission for Aid to Refugees are also on hand to give the migrants temporary residency papers.

"The idea is to give them a visa on humanitarian grounds while their residency status is sorted out so they can obtain a work permit," said Rangel.

Around 3,000 people who traveled with the caravan are now in Tijuana, most of them living in a makeshift shelter that Mexican authorities set up in an open air sports arena, with tents and mattresses.

Another 1,000 who lagged behind in the nearby town of Mexicali were on their way Tuesday to Tijuana, persevering along a hot, dry road.

"Worker wanted," reads a job ad that Wilmar Correa holds while waiting in line at the fair.

He is a 27-year-old Honduran who studied to be a teacher, but he never made it because of the gang violence and lack of jobs in his country.

Correa says he is willing to work at anything in the prosperous industries operating along the US-Mexico border.

As in other cities along the frontier, what drives the economy in Tijuana is manufacturing, especially automobiles, aerospace, pharmaceuticals and electronics.

To the south, along the fine beaches of Baja California, the state that includes Tijuana, restaurants and hotels catering to foreign tourists abound.

US-Mexico bilateral trade totals about $500 billion a year and 80 percent of Mexico's exports go to the US, its main trading partner.

At the job fair, employers are offering 7,000 to 10,000 jobs in manufacturing and areas like the hospitality industry, said Salvador Diaz, president of a local manufacturing association.

He says it's a win-win situation: migrants get an above-board job and business get tax-deductible labor, said Diaz.

For the equivalent of around $90 a week, Cesar Elvir hopes to work as a painter in a factory.

This 20-year-old Honduran traveling with his wife and two children has already gone through the interview process and is waiting for the company to call him on his cell phone with a formal offer.

"It looks good. My goal is not to stay in Tijuana, but while I am waiting for other opportunities I would stay here for a while," Elvir said with a smile.

The Central American caravan is giving a taste of deja vu to Tijuana, which two years ago saw the arrival of thousands of Haitians also bound for the US. Many made it but many also stayed and put down roots in Mexico.

"The Haitian case was very positive," said Diaz. About 2,500 of them ended up working, legally, in manufacturing plants, he said.

"The most important thing is they blended in to society very well. We have not had any problems with them. We want to do the same thing with the Central Americans," Diaz added.

But hundreds of residents of Tijuana protested the presence of the caravan, asserting that many of the travelers are members of street gangs called "maras" and will trigger violence.

Trump has made similar allegations.

As of Tuesday, 40 migrants with the caravan have been deported, out of 57 detained for offenses such as drug possession, fighting and public disorder, city officials said.

But the vast majority are families with good intentions and "they tell us they can help identify those people (gang members) and turn them over to be deported," said Diaz.

After filling out a job application, Karla Vallecio, 34, recalls that back in Honduras she worked taking care of babies, cleaning other people's houses -- "whatever I could get."

"If I got a job the first thing I would do is find a room for me so I can stay in Tijuana, she said, explaining that the process of asking for asylum in the United States is slower and more complicated than she expected.