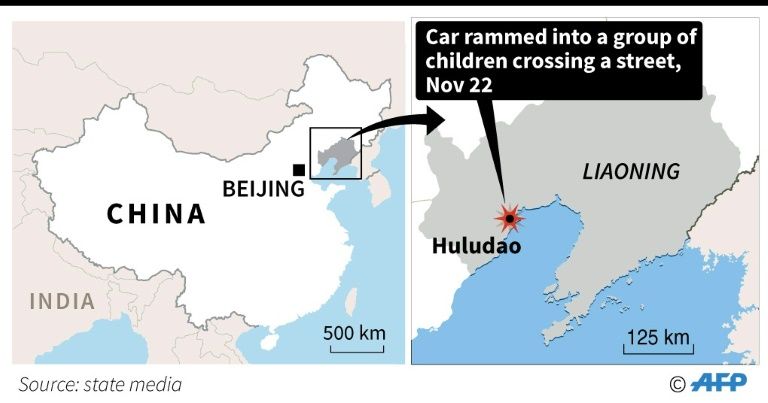 Five dead, 18 hurt as car rams into children in China

A car rammed into a group of children crossing a street in front of an elementary school in northeast China on Thursday, killing five people and injuring another 18, state media said.

Police took the driver into custody and are investigating the cause of the incident in Huludao, Liaoning province, the official CCTV broadcaster said on its Weibo social media account.

Unverified videos circulating on social media appeared to show a car veering onto the wrong side of the road and ploughing through the line of pupils, with the impact from the crash throwing bodies across the road.

Other gut-wrenching footage showed at least two small children lying unconscious and bleeding on the street. The screams and cries of children could be heard in the background, as onlookers milled around the scene of the collision.

Victims of the crash are undergoing medical treatment, according to CCTV. The incident happened around noon.

The ages of the victims were not released.

Police from Jianchang county in Huludao city did not immediately respond to AFP requests for comment.

Grisly car accidents are common in China, where transportation authorities have struggled to enforce safety regulations, which are often flouted or go unenforced.

According to authorities, 58,000 people were killed in traffic accidents across the country in 2015 alone.

Violations of traffic laws were blamed for nearly 90 percent of accidents that caused deaths or injuries that year.

Earlier this month, at least 13 people died when a bus plunged off a bridge in Chongqing municipality, after the driver got into a fist fight with a passenger who had missed her bus stop.

Search and rescue teams dispatched more than 70 boats, as well as a team of scuba divers and underwater robots, to find the wreckage and retrieve bodies from the water.

In February, a van packed with pressurised gas tanks and petrol-filled bottles caught fire and ploughed into pedestrians in Shanghai, leaving at least 18 people injured.

Authorities concluded that it had been a "traffic accident".

But a 2013 incident was blamed on militant separatists.

Two tourists were killed at the time when a car rammed into bystanders in Beijing's iconic Tiananmen Square before bursting into flames.

Three attackers also died in the incident, which Beijing blamed on separatists from the restive western region of Xinjiang.

And in September, 11 people died and dozens were injured when a car struck a crowd in a public square in the central Hunan province city of Hengdong.

Police detained the driver, a man in his 40s, and described him as a "vengeful repeat offender" who had daggers in his car and intended to "cause serious damage".