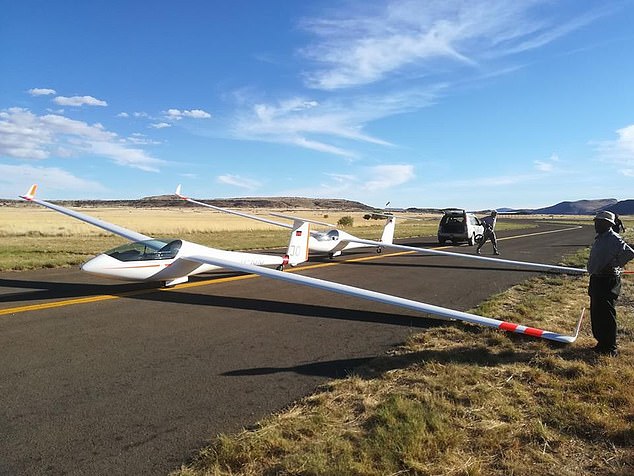 The two children of the British glider pilot killed on his 60th birthday in South Africa are 'devastated' and considering flying out to join their widowed mother.

Guy Reading, 28, and his sister Gemma, 26, are 'in a state of shock' after hearing the news of their father's tragic death, according to friends.

Their father Peter, a top British glider pilot, was killed when his aircraft slammed into a rocky hillside at 150mph whilst celebrating his 60th birthday with a solo flight over the plains of South Africa.

Highly experienced Peter was on his 9th day of pleasure flights during a romantic gliding holiday with wife Ingrid when tragedy struck as he went up to fly alone.

Highly experienced pilot and Peter Reading, 60, (in glasses) died after his glider stalled on a solo flight over the plains of South Africa

A Jonker JS-1 Revelation glider that is capable of speeds of up to 175mph in normal flight, identical to one Peter was flying

The father-of-two from Godalming, Surrey, had been launched from an airfield in a Jonker JS-1 Revelation glider that is capable of speeds of up to 175mph in normal flight.

'We spoke to his grown-up children last night and they are in a state of shock,' pensioner Joan Withers, a neighbour, told MailOnline.

'They are thinking about flying out there. Both of them have taken time off work. It's one of those truly devastating things and we are all terrible sorry.'

'He was just a lovely, chatty man,' she said. 'He has a passion for flying and was always telling us all about the places he'd flown to.'

Charlie Hogarth, 20, who lived next-door to the pilot all her life, said: 'He was a nice, considerate guy and very smart.

'He always had a friendly word to say and loved all the dogs on the road. He was devoted to his poodle cross, Dougle.

'When my mum passed away, he did a lot for my dad in terms of having him over for drinks and giving him support.'

Flybe airline captain Peter got into difficulties as he tried to climb and is believed to have stalled the glider and gone into a deadly spin and was unable to pull up the nose before crashing.

He was trying to correct a full speed dive when the carbon and kevlar high performance glider hit the ground and disintegrated into bits on impact killing tragic Peter instantly.

The previous day he had taken Ingrid, 59, up in a two seater glider for a flight over the wild African Karoo and South Africa's biggest dam near Norvalspout in the Free State.

But on Monday he chose to fly alone with plans to glide for over five hours to celebrate his 60th birthday and was launched from the airfield next to the Gariep Dam after dawn.

A glider being prepared at Gariep Dam. Club chairman Manni Voigt said that their club was extremely popular with British pilots as it was one of the best long distance and soaring centres anywhere in the world

Eye witnesses said he got into difficulties shortly after take-off and it is thought the glider stalled due to lack of speed and it went into a deadly spin heading earthwards.

It is believed he had corrected the spin and was trying to pull up but ran out of height and slammed into the rocky hillside overlooking the Gariep Dam Airfield at high speed.

Rescuers raced to the scene but the glass fibre shell of the glider had shattered into hundreds of pieces and Peter's body was found amongst the scattered wreckage.

It is thought wife Ingrid was relaxing at the airfield cafe awaiting the return of her husband who had clocked up over 40 hours of flying so far during their gliding holiday.

The mother-of-two was said by members of Gariep Dam Gliding Club to be 'inconsolable' and is now having to make arrangements to bring her husband's body back home.

Club chairman Manni Voigt said that their club was extremely popular with British pilots as it was one of the best long distance and soaring centres anywhere in the world.

Manni, 55, said: 'Peter and Ingrid had visited South Africa before to glide but this was their first time at our club I believe and he was hiring gliders from a Dutch member.

'He is a very experienced glider pilot with over 6000 flying hours under his belt and a further tragedy is that he had gone up to fly to celebrate on his 60th birthday.

'Peter was launched by winch and wanted to fly for as long as he could on his big day but tragically it wasn't to be.

'We don't know exactly what happened but it would seem he was flying too slow and lost lift on a wing and stalled and he went into a spin and spiralled down into the hill.

'If you have enough height you can stop the spin and dive to regain lift but if you are too close to the ground say 1000 feet or less then it is very hard to get out of trouble.

Peter's wife of 31 years, Ingrid with their dog Dougal. The mother-of-two was said by members of Gariep Dam Gliding Club to be 'inconsolable' and is now having to make arrangements to bring her husband's body back home

Gliders at Gariep Dam awaiting launch. Gliding over the Karoo in Africa is very different to gliding in the UK as the weather is very strong due to the heat and the thermals, said club chairman Manni Voigt

'We don't fully know what happened but something went very wrong. These gliders pick up enormous speed very quickly when they go into a vertical dive. He would have been doing 250kph.

'Just the day before he Peter was killed he took Ingrid up in a two seater glider and they had a marvellous flight. For her to lose her husband in this way is just absolutely heart breaking.

'Gliding out here over the Karoo in Africa is very different to gliding in the UK as our weather is very strong due to the heat and the thermals and you have to be very wary.

'Flying here at Gariep Dam we can experience very strong winds and turbulence as there is a lot of energy out there over the slopes because of the heat this time of year.

'You get incredible lift but have to be very wary of it and constantly on the alert. I have been flying gliders here for 33 years and I am wary of it on every single flight' he said.

Peter, a commercial airline pilot, is ranked among the top 100 glider pilots in the UK and regularly competes in long distance cross country races.

The previous day Peter had taken his wife Ingrid, 59, up in a two seater glider for a flight over the wild African Karoo and South Africa's biggest dam near Norvalspout in the Free State

He has flown gliders all over the world and competes in the British Nationals supported by wife of 31 years Ingrid who works as an exam invigilator in Surrey.

Highly experienced Peter is a member of the Lasham Gliding Society in Alton, Hants, where he instructs and has also been their vice chairman and media spokesman.

The South African Civil Aviation Authority confirmed that a fatal glider accident occurred near Gariep Dam on Monday morning and that it is being investigated.

Provincial police spokesperson Sgt Yang Ngckana confirmed one person died who was the pilot flying solo and said that an inquest docket had been opened.

Head of Safety Fred Bebington of the Soaring Society of South Africa confirmed that a pilot had died whilst flying at Gariep Dam but was awaiting more information.

Peter and Ingrid married in 1987 and had son Guy, 28, who is an informatics scientist with llika in Southampton and a daughter Gemma Louise, 26.

A coroner's report is being prepared along with a request for permission to return the body to the UK where the much loved pilot is being mourned in the gliding community.

The Chairman of Lasham Gliding Society where Peter was a member said that his passing would leave a huge gap in the gliding community.

'A well-known Lasham personality and expert professional and glider pilot, he was a key member of our Airspace Team bringing massive technical knowledge of how airliners and other commercial traffic use the airspace in and around us.

'He was given a Life Membership in 2017 in recognition of his work for Lasham.

'The accident is currently under investigation by the South African Civil Aviation Authority and the provincial police.

Glider sheds at Gariep Dam. Peter was launched from the airfield next to the Gariep Dam after dawn to celebrate his 60th birthday

'Our thoughts at this stage are with Peter's family.' he said.

Chief Executive Officer of the British Gliding Association Peter Stratten said:' Peter was a very experienced pilot and was both a professional commercial pilot and a recreational glider pilot.

'He did a lot of voluntary work as well for his club at Lasham and would be in amongst the top 100 glider pilots in the UK.

'It is a tragic loss that will be hard felt among the gliding community. We don't know what happened yet. It is under investigation.

'Peter was married with two children and was an airline captain with Flybe.

'At the end of the day gliding is an adventurous activity and people understand the risks they are taking but sometimes, fortunately very rarely, things can go tragically wrong' he said.