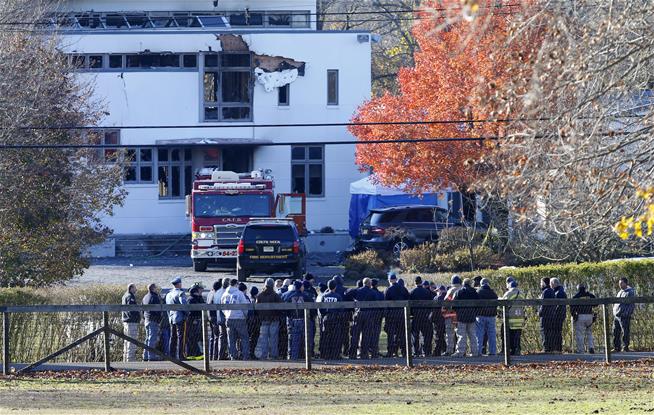 Family Was Murdered Before Mansion Fire

(Newser) – Another disturbing twist in the New Jersey mansion fire case: Authorities have confirmed that all four members of a family were murdered before their Colts Neck home was set on fire Tuesday. Monmouth County Prosecutor Christopher Gramiccioni said Wednesday that the case had "transcended" from an arson investigation to a multiple homicide case. "Our investigation has revealed that unfortunately, sadly, each of these individuals were the victims of homicidal violence at some point prior to when the fire was set," he said, adding that investigators believe the family "in some form or fashion was targeted." An official tells ABC that the killer shot 50-year Keith Caniero, whose body was found on the lawn.

Caniero's 45-year-old wife, Jennifer, and their children, 11-year-old son Jesse and 8-year-old daughter Sophia, were stabbed, the official says. Their badly burned bodies were found inside the mansion. Gramiccioni said he could not confirm or deny that Paul Caneiro, Keith Caniero's 51-year-old brother, was a suspect in the killings, the AP reports. Paul Caniero was arrested Wednesday and charged with setting his own home on fire while his wife and children were inside. That fire happened almost eight hours before his brother's home less than 15 miles away was set ablaze, though neighbors say Paul Caniero remained on the scene for hours "with tears in his eyes," NJ.com reports. The brothers were business partners in the Square One technology firm. (Read more arson stories.)