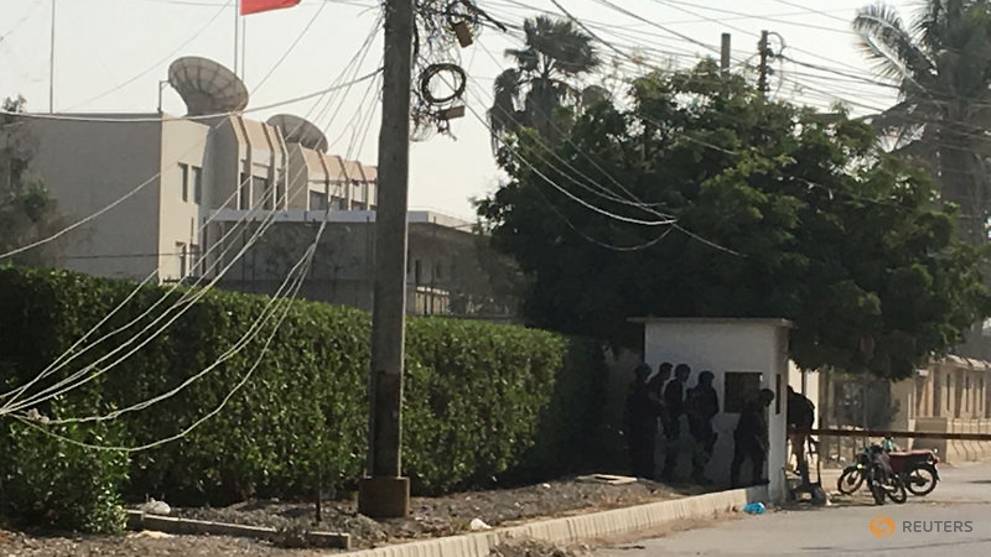 Paramilitary forces and police take cover behind a wall during an attack on the Chinese embassy, where blasts and shots are heard, in Karachi, Pakistan November 23, 2018. REUTERS/Akhtar Soomro

KARACHI, Pakistan: At least two Pakistani policemen were killed and a security guard wounded during an attack on the Chinese consulate in Karachi on Friday (Nov 23), a doctor told Reuters.

"We have two cops brought dead and security guard injured due to blast impact," said Seemin Jamali, a doctor at the Jinnah Hospital in Karachi.

Shortly after the attack, a separatist militant group from the Pakistani province of Balochistan claimed responsibility for it.

"We have carried out this attack and our action is continuing," the spokesman for the Balochistan Liberation Army, Geand Baloch, told AFP by telephone from an undisclosed location.

"There were three suicide attackers," he said. "They stormed the Chinese embassy in Karachi. China is exploiting our resources."

Geo TV reported one gunman was killed in the attack and a "suicide vest" had been recovered.

The Karachi police chief later confirmed that three suicide bombers were also killed in the attack, and the attackers were unable to get into the building.

He added that the suicide bombers used an explosive-filled vehicle during the attack.

Up to four gunmen tried to enter the consulate but were intercepted by security guards at a checkpoint, senior local police official Javaid Alam Odho told AFP.

He added that the attackers "ran away" but did not confirm if the attack was over, saying the area had been cordoned off and security forces were conducting a clearing operation.

Pictures posted to social media purportedly of the attack showed smoke rising from the area.

Karachi, Pakistan's largest city and a financial hub, was for years rife with political, sectarian and ethnic militancy.

A crackdown in the city by security forces in recent years has brought a lull in violence, but scattered attacks still take place.

China, one of Pakistan's closest allies, has poured billions into the South Asian country in recent years as part of a massive infrastructure project that seeks to connect its western province Xinjiang with the Arabian Sea.

The project, the China-Pakistan Economic Corridor, is one of the largest projects in Beijing's "One Belt One Road" initiative, comprising a network of roads and sea routes involving 65 countries.

But for Pakistan, participating in the project presents an enormous challenge in a country plagued by weak institutions, endemic corruption and a range of insurgencies in areas slated to host the corridor.

The subject of economic dividends from CPEC is extremely sensitive in some of the areas the corridor will run through - particularly in resource-rich Balochistan.

Since the beginning of the project militants have repeatedly attacked construction sites and targeted Chinese workers.

Karachi, Pakistan's largest city and a financial hub, was for years rife with political, sectarian and ethnic militancy.

A crackdown in the city by security forces in recent years has brought a lull in violence, but scattered attacks still take place.