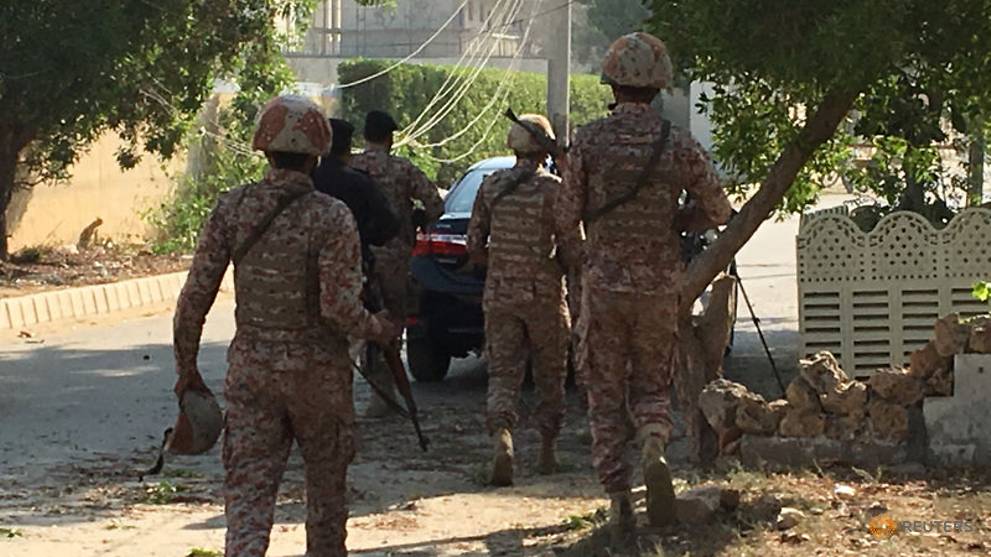 Paramilitary forces and police are seen during an attack on the Chinese consulate, where blasts and shots are heard, in Karachi, Pakistan, Nov 23, 2018. (Photo: Reuters/Akhtar Soomro)

PESHAWAR: At least nine people were killed and 27 wounded when a blast ripped through a marketplace in Pakistan's restive northwestern tribal region Friday (Nov 23), officials said.

"We are trying to ascertain the nature of the blast" in Kalaya, a town in Orakzai agency, senior local official Khalid Iqbal told AFP. A second official confirmed the toll.

Orakzai is one of seven restive semi-autonomous tribal regions on the Afghan border, an area that has long been a focal point in the global war on terror.

Washington has insisted that the region provides safe havens to militants including the Afghan Taliban and Al Qaeda - an allegation that Islamabad denies.

The blast occurred around the same time as three attackers attempted to storm the Chinese Consulate in the southern port city of Karachi in an unrelated incident in which two police officials were killed. The Karachi attack was claimed by the ethnic insurgent Baloch Liberation Army.

Pakistan has been battling Islamist groups in the tribal belt since 2004, after its army entered the region to search for Al-Qaeda fighters who had fled across the border following the US-led invasion of Afghanistan.

It has carried out multiple bloody military operations in the area, officially known as the Federally Administered Tribal Areas (FATA).

Earlier this year Pakistan passed legislation which paves the way for the tribal areas to be merged into neighbouring Khyber Pakhtunkhwa province, bringing them into the political mainstream.