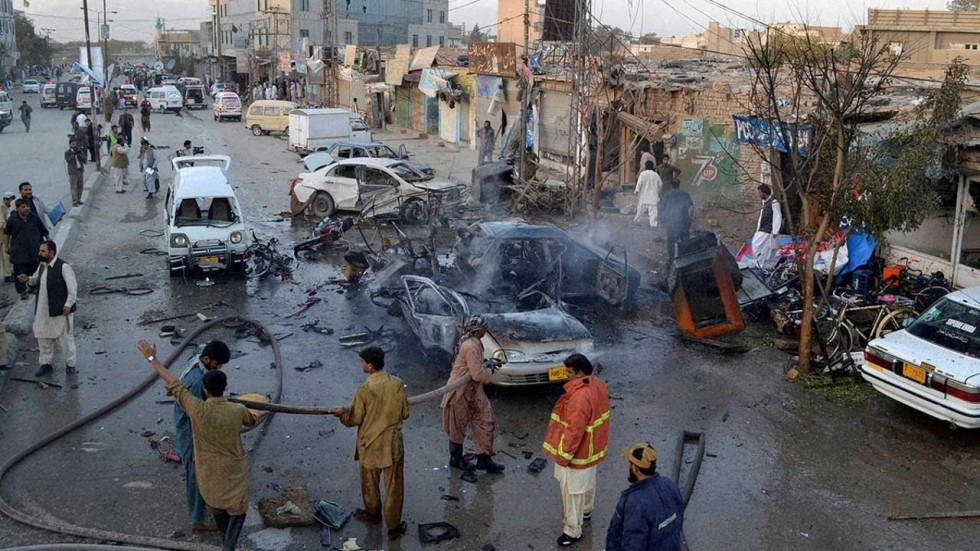 At least 25 people were killed and 50 wounded when a bomb hidden in a carton of vegetables ripped through a crowded marketplace in Pakistan’s restive northwestern tribal region on Friday.

The attack took place during the regular Friday bazaar in Kalaya, a town in a Shiite-dominated area of Orakzai tribal district, according to senior local official Khalid Iqbal.

“According to our initial investigation, it was an improvised explosive device hidden in a carton of vegetables,” he said. A second official, Ali Jan, confirmed the death toll.

The blast occurred outside the door of a religious seminary at about the same time that three attackers tried to storm the Chinese consulate in the southern city of Karachi, killing two policemen. The two attacks do not appear to be connected.

Abbas Khan, the assistant commissioner of the district, said that three members of the minority Sikh community in Kalaya and two security officials were among the dead.

Orakzai is one of seven restive semi-autonomous tribal regions on the Afghanistan border, an area that has long been a focal point in the global “war on terror” and was famously described by Barack Obama as “the most dangerous place in the world”.

Washington has insisted that the mountainous region provides safe havens to militants including the Afghan Taliban and al-Qaeda – an allegation that Islamabad denies.

Pakistan, which joined the US “war on terror” in 2001, says it has paid the price for the alliance.

It has been battling Islamist groups in the tribal belt since 2004, after its army entered the region to search for al-Qaeda fighters who had fled across the border following the US-led invasion of Afghanistan.

Multiple bloody military operations have been carried out in the area, officially known as the Federally Administered Tribal Areas (FATA) and home to about 5 million ethnic Pashtuns.

Security has improved in the region in recent years, though lower-level attacks are still carried out with devastating regularity, often targeting Shiites in the area. It remains notorious for the availability of cheap guns and smuggled goods, along with narcotics including hashish and opium grown in both the FATA and neighbouring Afghanistan.

As the US fails in Afghanistan, Pakistan should be prepared for fallout and we must ensure greater security for our tribal areas

Earlier this year, Pakistan passed legislation which paves the way for the tribal areas to be merged into neighbouring Khyber Pakhtunkhwa province, bringing them into the political mainstream.

The move will impose the Pakistani judicial system on a region still loosely governed by British colonial-era laws and the tribal system of honour, and which has always existed on the fringes of the state.

In a Twitter post, Pakistan’s minister for human rights Shireen Mazari condemned the attack and said the casualty toll could rise.

She tied the incident to the situation across the border, saying “as the US fails in Afghanistan,” Pakistan should “be prepared for fallout and we must ensure greater security for our tribal areas.”

The province’s chief minister, Mehmood Khan, also condemned it, saying, “To target innocent citizens is inhumane,” according to the Dawn newspaper’s online edition.