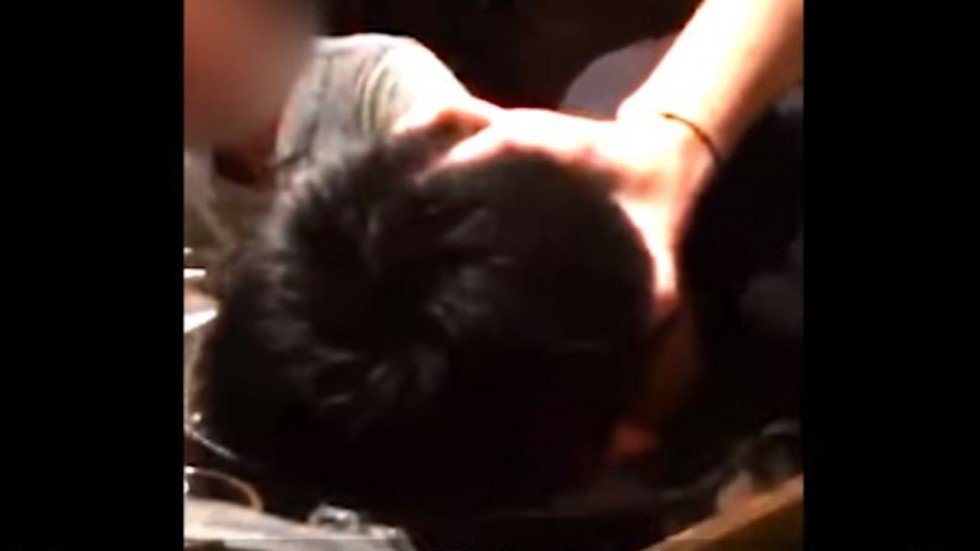 A video clip of a corporate executive forcing the head of one of his employees into a scalding pot of food at a party has gone viral in Japan and triggered outrage on social media sites.

The clip, apparently taken on at least two mobile phones and lasting a little over a minute, was initially published on the website of the Shukan Shincho weekly news magazine but was quickly picked up by other outlets.

It shows a group of people in a Japanese-style restaurant with jugs of beer and plates of food on the table. In the centre of the table is a nabe, a pot of boiling water used for cooking meat and vegetables, above a lit stove. A man whose face does not appear in the footage grasps the back of the head of the victim – whose face has been obscured – and forces it into the bubbling water in the pot. Onlookers can be heard laughing in the background.

The video on the website says the incident happened at an end-of-year party in 2015 for an entertainment agency based in Tokyo’s Shibuya Ward that the Mainichi newspaper identified as MELM.

The clip also includes a still image of the man showing extensive burns to his face. According to the complaint, his injuries required a month to heal.

Why is racism so big in Japan?

The man has filed a criminal complaint for assault against the president of the company and is seeking damages, his lawyer told the media. The man has not been named and it is not clear why he waited nearly three years to file the lawsuit, although the man told a press conference this week he suffered flashbacks to the incident every time he sees a nabe pot.

He added he wants the president to admit what he did was wrong and atone for his actions.

Reaction on social media has been swift, with a poster named Yubaru on the Japan Today news website saying the three-year delay in filing the compensation suit was irrelevant.

“What difference does it make?” he asked. “Assault is assault and that ‘president’ has some serious power harassment issues.”

Another poster described the footage as “horrific”, adding “worst boss ever”.

Others have suggested the president should face criminal charges for assault or the Japanese equivalent of grievous bodily harm. In reply, another commentator said the onlookers who had failed to stop the incident should also face charges. One commentator on the site said bullying was an ingrained part of Japanese corporate culture.

“You are not allowed to say ‘no’ to your bosses or [superiors]. Written, official rules are often overridden by ‘oral’ rules,” the poster wrote. “There’s likely a lot more cases like this which are not reported. The victim here will probably get blacklisted now that he reported this and will have a hard time finding another job, which is probably why he chose to wait and [the] others didn’t bother reporting it.”

Under Japanese law, there are no statutes that prohibit power harassment in the workplace while sexual harassment regulations are considered toothless. Of the 36 member states of the Organisation for Economic Cooperation and Development, only Japan, Chile and Hungary have no criminal punishment for office harassment cases.

In a study conducted in 2017 by the Japanese Trade Union Confederation, 30 per cent of the 1,000 people who had been the victim of workplace harassment said they had sought treatment for psychosomatic illnesses and 20 per cent had resigned from their jobs.