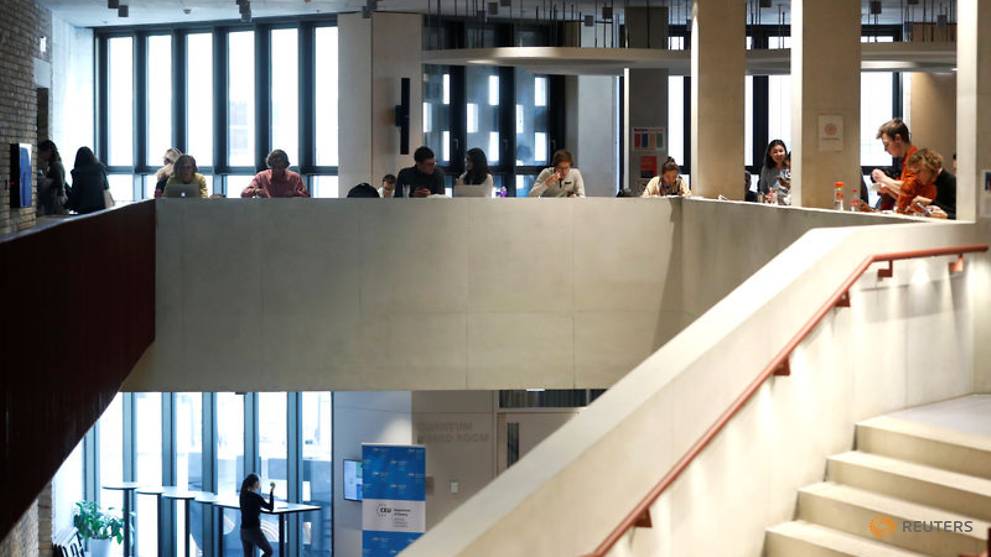 For nearly three decades Central European University has been a gateway to the West for thousands of students from ex-communist eastern Europe, offering U.S.-accredited degree programmes in an academic climate that celebrates free thought and open debate.

A view inside the Central European University in Budapest, Hungary, November 14, 2018. REUTERS/Bernadett Szabo

BUDAPEST: For nearly three decades Central European University has been a gateway to the West for thousands of students from ex-communist eastern Europe, offering U.S.-accredited degree programmes in an academic climate that celebrates free thought and open debate.

Now that looks set to change as the graduate school founded in Budapest by U.S. financier George Soros in 1991 prepares to move to a new campus in Vienna after a lengthy battle with Hungarian Prime Minister Viktor Orban's government.

Orban, a conservative nationalist, accuses the Hungarian-born Soros of plotting to destroy European civilization by flooding the continent with immigrants. Soros says his support for refugees is one part of a wider humanitarian mission to back open societies around the globe.

Following legal changes widely seen as targeting CEU and strongly criticised by the European Union and rights groups, the university says it will leave Budapest if it does not get guarantees of academic freedom by Dec. 1.

Orban's government has ruled out any concessions to CEU, effectively marking the symbolic end of an era for higher education in Hungary, an EU member state, and raising the prospect of considerable upheaval for many students.

Recalling how studying for his MA and PhD degrees at CEU transformed his life, Otto Gecser, 43, said students there were brought into contact with "cutting-edge research" and that the university's diverse student body - drawn from all over Europe and the world - provided unique opportunities.

"We could learn a lot from them and I guess this ... trickles down through us when we teach at (our) universities," said Gecser, who now heads ELTE University's Sociology Department in Budapest.

More than 3,500 CEU alumni are currently working and teaching in Hungary. CEU also has joint projects with other Hungarian universities.

Echoing Gecser's comments, Hungarian academic Petra Bard, 42, said her legal studies at CEU had proved "a transformative experience" which taught her to think critically, to engage in debates and defend her views.

"This is a different approach we learnt towards debating, towards challenging anything, any thought. What we were taught is freedom of academia, freedom of speech," she said.

Hungarians comprise about 20 percent of the 1,320 students admitted to CEU for the 2018-19 academic year. Many others are from central and eastern Europe, the former Soviet Union and western Europe, with smaller numbers from further afield.

CEU says it will move its U.S.-accredited degree programmes - accounting for the bulk of its courses - to Vienna, but currently enrolled students will remain in Budapest to complete their degrees. Around 600 new students are expected to be enrolled at CEU in Vienna next year.

Zsolt Enyedi, CEU's Pro-Rector for Hungarian Affairs, said the university's Hungarian language degree programmes - a fraction of the courses offered - were accredited for five more years, so hopefully that would allow the Vienna-based students to come to Budapest for exchange programmes and vice versa.

But the changes will pose significant logistical challenges, in terms of visas, accommodation and residence permits, and commuting between the two cities - some 250 km (155 miles) apart - will become a way of life for many students and teachers.

"Unfortunately, we cannot be completely sure whether this is a model that is sustainable for the long term," said Enyedi.

"Obviously, if a considerable part of our education is concentrated in a different country, if CEU as an American institution is no longer present in Hungary then the bridge that we will be building in the future may be actually more between America and Austria, than America and Hungary."

Enyedi said CEU would considerably increase stipends for the students in Austria to make studies affordable for Hungarians and other eastern Europeans.

"At the same time, I can imagine that the change will have an impact on our student body. It is easily imaginable that our west European intake will increase, probably we will have more Austrian students," he said.

CEU students plan to stage a protest before Hungary's parliament on Saturday and will be joined by students from other universities, but they realise there is little hope of changing the government's mind and many are bracing for upheaval.

"On a personal level, of course it will affect our studies because... moving will cause a lot of change," said Nassim Abi Ghanem, 28, from Lebanon, a PhD student.

"We have our supervisors, our classes that will be disrupted. Where we are going to live and how we are going to do all this personal day to day stuff? So yes, this adds anxiety to students."

(Reporting by Krisztina Than; Editing by Gareth Jones)