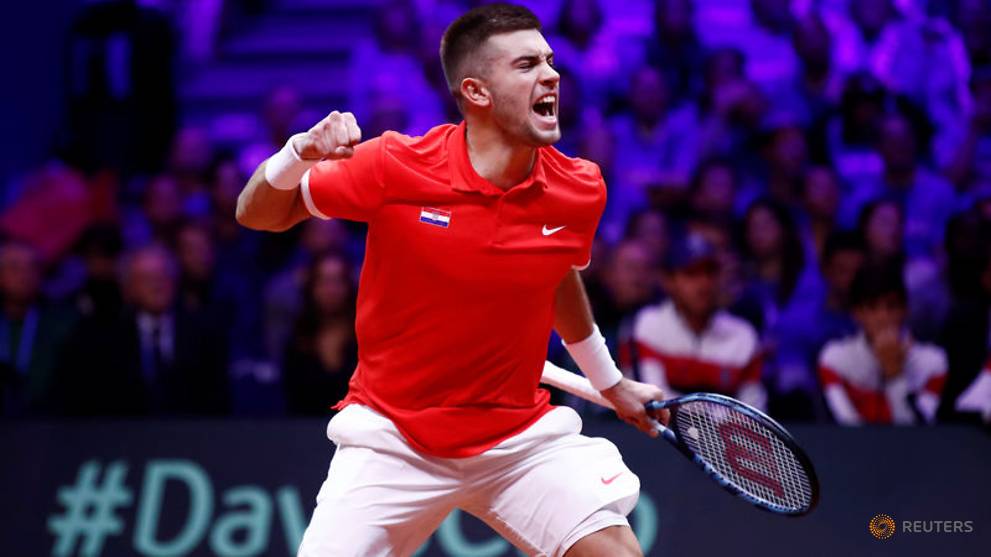 Croatia's Borna Coric outplayed Frenchman Jeremy Chardy to give his country the perfect start in the Davis Cup final on Friday.

LILLE, France: Croatia's Borna Coric outplayed Frenchman Jeremy Chardy to give his country the perfect start in the Davis Cup final on Friday.

The 22-year-old broke serve in the opening game of the opening singles rubber inside the huge Stade Pierre Mauroy and was in control throughout a one-sided contest to claim a 6-2 7-5 6-4 victory and put favourites Croatia 1-0 ahead.

Holders France, bidding to win the Davis Cup for the 11th time, will now hope Jo-Wilfried Tsonga can level things up when he takes on world number seven Marin Cilic later.

If not it will be a long way back for the hosts, who have won seven successive ties in the competition.

Yannick Noah, hoping to end his third stint as France captain with a fourth title, sprang a surprise by opting for Chardy for the opening day's singles rather than Lucas Pouille, the highest-ranked player in his squad.

His gamble backfired though as the 31-year-old was given a claycourt lesson by the world number 12.

There was an end-of-era feel during the buildup to the final - the last before the 118-year-old team competition gets a major revamp next year.

Whatever the future holds it did not detract from the electric atmosphere under the closed roof of a stadium which is home to soccer club Lille and last week hosted a rugby international between France and Argentina.

Few fans are more passionate about the Davis Cup more than France's and they cranked up the volume with their choreographed chanting as the players walked on court for the anthems, accompanied by fireworks and spotlights.

But it was the large block of Croatians high up in the freezing upper tiers who soon found their voices as Coric, hero of his country's semi-final win over the United States, took control against 40th-ranked Chardy.

He broke serve after an 11-minute opening game in which Chardy led 40-0 and won 15 points in a row on his way to taking the first set in emphatic fashion.

Noah's pep talks galvanised Chardy in the second set and his booming forehand finally gave him a toe-hold in the match.

Coric was relentless though and at 5-5 he forged three break points after some terrific scrambling and Chardy, who had saved break points at 3-3, succumbed with a weak backhand.

The only moment of concern for Coric was when he left the court for a medical timeout leading 4-3 with a break of serve in the third set. Again Noah got in Chardy's ear but to no avail as Coric returned to finish the job.