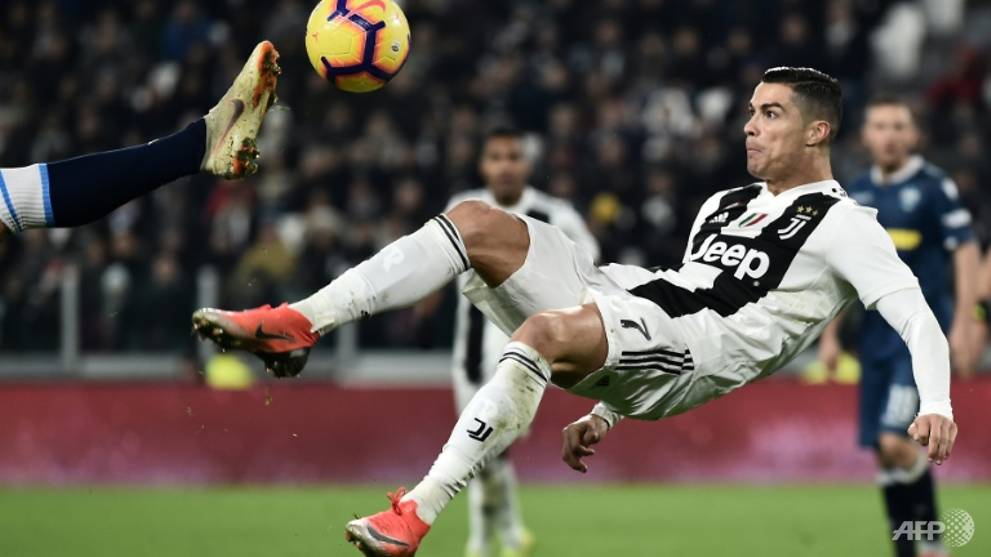 Football: Ronaldo, Mandzukic on target as Juventus ease past SPAL

Cristiano Ronaldo goes joint top of the Serie A scorers with his ninth goal this season. (Photo: AFP/Marco BERTORELLO)

ROME: Cristiano Ronaldo continued his hot form for Juventus on Saturday (Nov 24) as he and Mario Mandzukic scored both goals in the second consecutive game to help the Serie A leaders open up a nine-point lead at the top of the table with a 2-0 win over struggling SPAL.

Ronaldo slotted home Miralem Pjanic's free-kick after 29 minutes in Turin to join Genoa's Krzysztof Piatek at the top of the Serie A scoring charts, before Mandzukic sealed the three points on the hour mark in a simple warm up for Tuesday's crucial Champions League visit of Valencia.

The pair also scored both in Juventus' 2-0 win over AC Milan before the international break, and Ronaldo's strike was his seventh in as many games in all competitions for his new club.

SPAL, fighting relegation, were no match for Massimiliano Allegri's reigning champions who are nine points ahead of Napoli, with Carlo Ancelotti's side gunning to close the gap when they play bottom club Chievo on Sunday.

Following his opener, 33-year-old Ronaldo sent wide a chance for a brace after the break.

But he played a role in the second goal scored by Mandzukic, who was wearing the captain's armband for the first time.

Ronaldo latched onto a long ball and pulled it back for Douglas Costa, whose shot was cleared into the path of Mandzukic and gobbled up by the Croatian.

Roma suffered a setback ahead of Tuesday's Champions League game against holders Real Madrid at the Stadio Olimpico, falling to a 1-0 defeat at Udinese.

Eusebio Di Francesco's side were sluggish against the hosts, who pulled away from the relegation zone thanks to Argentine Rodrigo De Paul's 54th-minute goal.

"When you have almost 80 per cent possession in the first half, what you lack is determination to finish the game," Di Francesco said after his side drop to seventh, 18 points behind Juve.