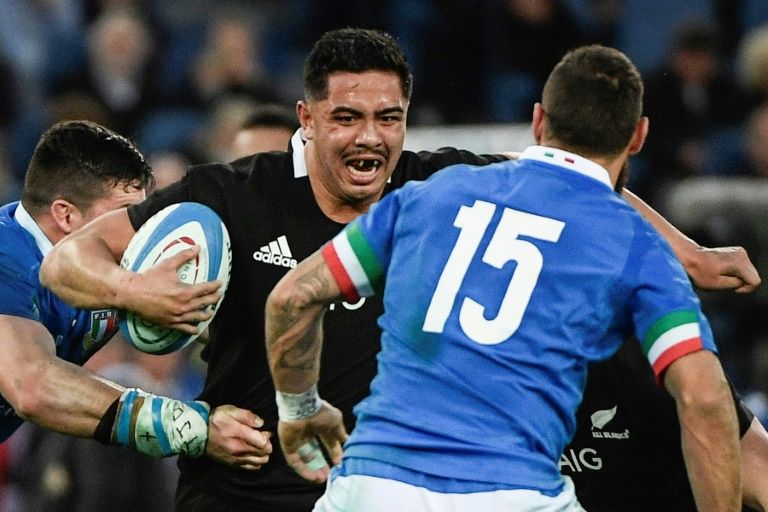 All Blacks' whet appetite for World Cup with Italy mauling

Steve Hansen warned that New Zealand have whet their appetite ahead of their tilt at a third straight Rugby World Cup title next year after capping their northern hemisphere tour with a 66-3 rout of Italy in Rome.

"It has been a great tour for us," said 59-year-old Hansen after the All Blacks got ten tries past the Italians in the Stadio Olimpico.

"People might think that's a weird comment when we've just lost a game but there's been plenty of gifts."

The world champions scraped a 16-15 win over England in Twickenham followed by a 16-9 loss to Ireland in Dublin before arriving in Italy.

"We played England in the rain. They couldn't have got better conditions to play us in, they had a 15-point head start and we came back and won that game.

"I think we showed a lot of mental fortitude and calmness that was a real test for the leadership group and they came through well.

"So I think the northern tour has been great for us.

"I know that it will make us a little hungrier," continued Hansen, who led New Zealand to the last world title in 2015.

"It's always good if you go to the table hungry you get to eat a bit more than you normally would with your fork.

"You won't win the World Cup unless you're hungry and can deal with the pressure."

After captain Kieran Read led the mythical haka, the All Blacks took nine minutes to clock up their first points with TJ Perenara's try.

Conor O'Shea's side reacted, with Tommaso Allan's penalty kick making it 3-5 after 13 minutes.

But that was the last time the 65,000 crowd could cheer the home side. Tries by Damian McKenzie (two) and then Jordie Barrett (two, the second served by his brother Beauden) put the score 31-3 at half-time. In the second half, the visitors hammered home their superiority with five more tries.

"I'm really proud of the boys. It's been a tough end of year tour, we've played some difficult opposition, we didn't get the result we wanted in Dublin but bounced back and put in a performance that the whole of New Zealand can be proud of," said Hansen.

"Jordie Barrett scored four tries on the wing, one of them was a real beauty on the far side, a kick from his brother (Beauden).

"Damian McKenzie scored three and I was very happy with the way Vaea (Fifita) went at six, I thought he had a real physical presence so there were a number of guys who put their hand up," he said.

"We've found some young players, who have really challenged the senior players and put their hands up and said 'hey we're here'."

Read said it had been "a great season to learn" as the All Blacks now take a break before returning next year with four Test matches to build towards the Rugby World Cup in Japan.

"(We) put in some great performances and also some that weren't quite up to the standard that we're after, but that's been the case for a number of years," said the 33-year-old flanker.

"Every opposition (team) play their best game of the year against us and that's something to learn from comes from experience.

"I think we're in a pretty good spot right now.

"We've got a squad who are capable of a lot and you have to make sure you take the lessons and learn, so overall a pretty good year."