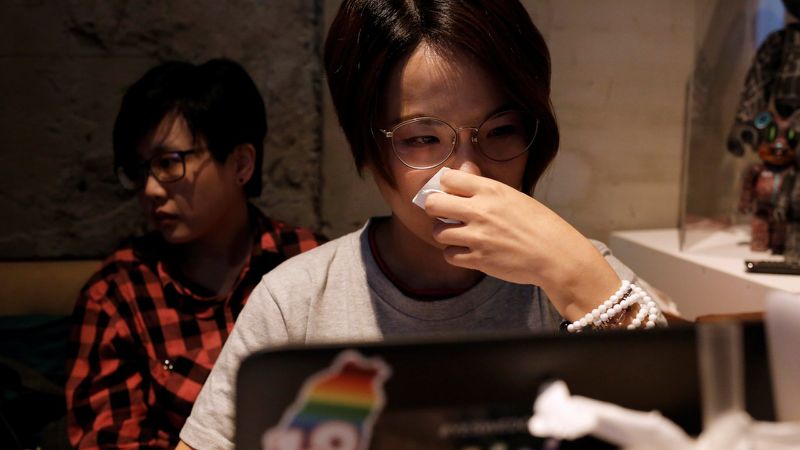 Gay rights campaigners in Taiwan have suffered a serious reversal after voters rejected a proposal to enshrine same-sex marriage in the island’s civil code.

On Saturday voters went to the polls in local elections, which ended in a serious reverse for the ruling Democratic Progressive Party and left the mayoral result in the capital Taipei on a knife-edge.

At the same time, the electorate also had to decide on 10 referendum proposals, including five highly divisive ones on LGBT rights.

The island had been seen as a beacon for gay rights in Asia after the High Court ruled last year that a ban on same-sex unions was unconstitutional.

But as well as galvanising supporters, the issue also prompted a backlash from conservative family values campaigners and thousands of activists from both sides took the streets ahead of Saturday’s vote.

The opponents of same-sex marriage emerged victorious, with all three measures they proposed – to define marriage as solely between a man and a woman, to prohibit primary and junior high school pupils from learning about LGBT issues, and to introduce limited protections for same-sex couples that fell short of marriage equality – being approved by the voters.

A controversial plan to change the name of the island’s sports teams from Chinese Taipei to Taiwan was also voted down by a margin of around 54-45 per cent.

The International Olympic Committee had warned that the self-ruled island risked being kicked out of future games if the measure, which was certain to anger Beijing, passed.

In other results, the mayoral election in the capital Taipei went to a recount after the candidate from the opposition KMT party appealed to the courts.

A marathon vote count ended at 2am with a narrow 3,000-vote margin of victory for the incumbent, the independent Ko Wen-je.

But the KMT’s Ting Shou-ching said the results “were full of irregularities” and claimed that voters had been allowed to cast their ballots after the polls officially closed at 4pm.

Lengthy queues were reported at many polling stations across the island, and Taiwan’s electoral law allows those who were waiting in line at the official closing time to cast their ballots.

But Ting demanded a recount and asked the courts to void the result because of the alleged irregularities.

A Taipei court later ordered that all ballot boxes should sealed until after a recount.

Court officials said that if any irregularities are found after the recount, the mayoral election in Taipei will be considered void and a re-election will be held.

Elsewhere, the island’s political map shifted dramatically leaving the mainland-friendly Kuomintang party in control of 15 cities and counties, including three of the country’s special municipalities.

The DPP lost control of seven local authorities, including its former stronghold of Kaohsiung in what local media and analysts interpreted as a vote of no confidence in President Tsai Ing-wen.

She announced that she would step down as chairwoman of the independence-leaning DPP after the vote, while Premier William Lai also offered his resignation but was asked to stay on.

Chen, a former mayor of Kaohsiung, had run the party’s losing campaign in the city.

Hung Yao-fu, the DPP’s secretary general, also quit, saying: “I must apologise to our supporters for not doing well enough and for using a wrong campaign strategy.”

Observers said Tsai’s resignation as the party chairwoman would hamper her chances of re-election in 2020 as she would be seen by many as a lame duck.

“The DPP resorted to playing the anti-mainland China and Taiwan independence card in the last month of the campaign in a bid to urge supporters to return to its fold,” said Wang Kung-yao, a political-science professor at the Chinese Culture University in Taipei.

He said such tactics had worked in the past because voters were afraid that Beijing would swallow the island up, but now it had been a “big failure as voters did not buy it”.