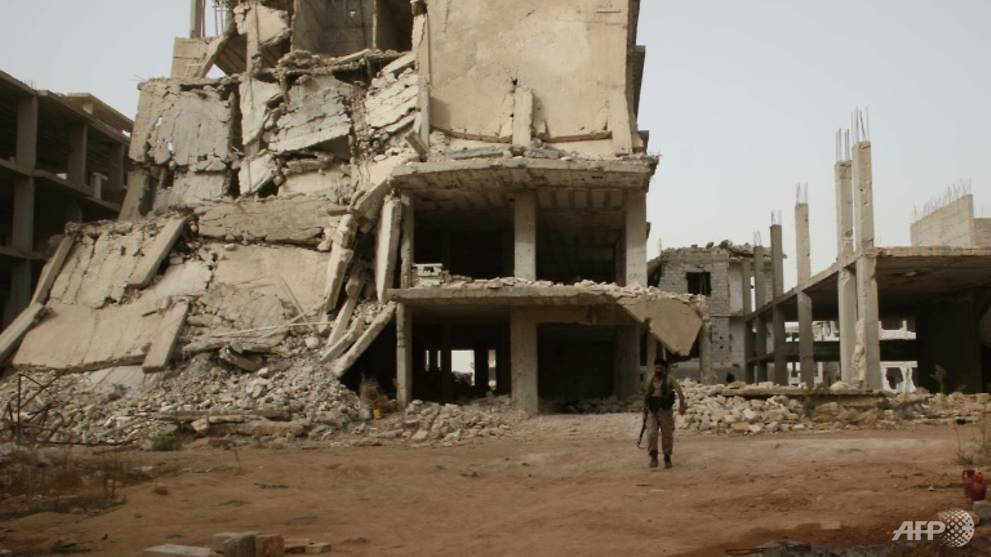 A Syrian rebel-fighter from the National Liberation Front (NLF) walks in a street in the rebel-held al-Rashidin district of western Aleppo's countryside near Idlib province, on October 15, 2018 AFP/Aaref WATAD

BEIRUT: Shelling by insurgents wounded more than 100 people in a suspected toxic gas attack in Syria's Aleppo, which a health official described as the first such assault in the city.

The shells caused dozens of people breathing problems on Saturday night (Nov 24) in Aleppo, while government shelling killed nine people in a village in Idlib, a monitoring group said.

It marks the highest such casualty toll in Aleppo since government forces and their allies clawed back the city from rebels nearly two years ago.

Rebel officials denied using chemical weapons and accused the Damascus government of trying to frame them.

The Russian defence ministry said the attack was launched from territory that former al-Qaeda militants control in the rebel stronghold of Idlib.

Russia also said it would talk to Turkey, which backs some rebel factions and has brokered a ceasefire with Moscow in the Idlib region.

"They were taken to al-Razi hospital and Aleppo University Hospital for treatment as a result of the irritating substance they inhaled."

Pictures and footage on SANA showed medical workers carrying patients on stretchers and helping them with oxygen masks.

"We can not know the kinds of gases but we suspected chlorine and treated patients on this basis because of the symptoms," Zaher Batal, the head of the Aleppo Doctors Syndicate, told Reuters.

Batal called it the first such gas attack in Aleppo city in the conflict, which has raged for more than seven years.

Abdel-Salam Abdel-Razak, an official from the Nour el-Din al-Zinki insurgent faction, said rebels did not own chemical weapons or have the capacity to produce them.

"The criminal regime, under Russian instructions, is trying to accuse the rebels of using toxic substances in Aleppo. This is purely a lie," he wrote on Twitter.