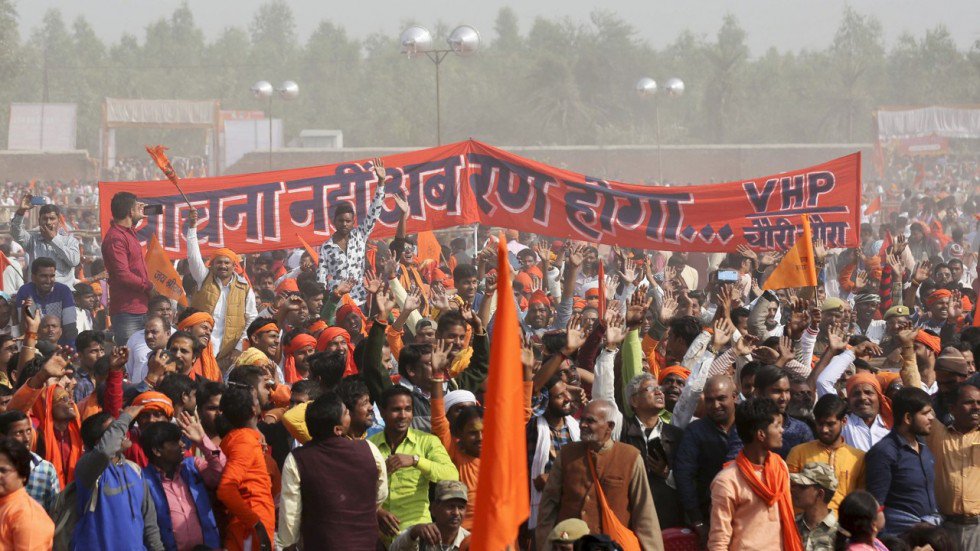 Thousands of Hindu hardliners rally in India for controversial temple

Tens of thousands of Hindu hardliners rallied on Sunday for a temple to be built at a disputed Indian holy site, where an ancient mosque was razed in 1992 sparking deadly riots.

Huge crowds of saffron-clad protesters, some waving swords and chanting “Praise Be to Ram”, massed in Ayodhya in northern Uttar Pradesh state where right-wing Hindu groups want a grand temple to their god constructed.

Organisers had expected 300,000 demonstrators to attend rallies in Ayodhya and two other Indian cities, with protesters arriving by bus and train throughout the day. Security measures were strengthened, with some 5,000 additional police deployed to protest areas, especially in Ayodhya.

Many Hindus believe a spot there marks the birthplace of Ram and a medieval mosque that stood there for 460 years was only built after the destruction of an earlier temple.

Hindu zealots reduced the Babri Mosque to rubble in 1992, kicking off riots across India that left thousands dead, most of them Muslims.

The site is still a flashpoint between Hindus and India’s sizeable Muslim minority and the show of force by hardliners came two weeks before the 26th anniversary of the mosque’s destruction.

Huge banners with images of the mosque being torn down by radicals with sledgehammers hung at the protest, where hardline leaders called for parliament to pass a law allowing for the temple’s construction.

Uttar Pradesh’s chief minister Yogi Adityanath, a firebrand monk who has long campaigned for the temple, unveiled plans on Sunday to build the world’s largest statue in Ayodhya – a 221-metre-high bronze likeness of Ram.

The temple controversy has been tied up in courts for decades but some hardline groups are applying pressure to Prime Minister Narendra Modi over the issue ahead of general elections in the next six months.

Modi, who is running for a second term, has faced some disquiet from his core supporters who feel that he has not done enough for the cause, despite his parliamentary majority.

Ram redux: will India return to the days of temple strife?

The Bharatiya Janata Party (BJP) he rules is a Hindu nationalist outfit with ties to some of the hardline groups rallying in Ayodhya, including the Vishwa Hindu Parishad (VHP) and Shiv Sena.

“The emotions of Hindus should not be taken for granted,” said Uddhav Thackeray, the head of Shiv Sena, according to the Press Trust of India.

VHP leader Champat Rai told demonstrators they would only accept “the entire area” for the Ram temple and would not consider sharing the site with Muslims.

Riaz Ahmed, a 50-year-old businessman from Ayodhya, said it was understandable that religious leaders would lobby for a temple in the holy city.

“But what’s worrying is that all this is being given a political colour,” he said.

More than 2,000 people died in widespread riots after the mosque was torn down in 1992.

Ten years later, the murder of Hindu pilgrims returning by train from Ayodhya triggered revenge attacks on Muslims in Gujarat that left more than 700 dead by government estimates.

The BJP was on the margins until the 1980s when it backed the movement for construction of the Ram temple in Ayodhya.

The promise for a temple has prominently figured in several BJP campaigns, especially in the bellwether Uttar Pradesh state, which it rules with an absolute majority.

Hindu groups have lobbied India’s highest court to consider their claim but the case been adjourned until January.