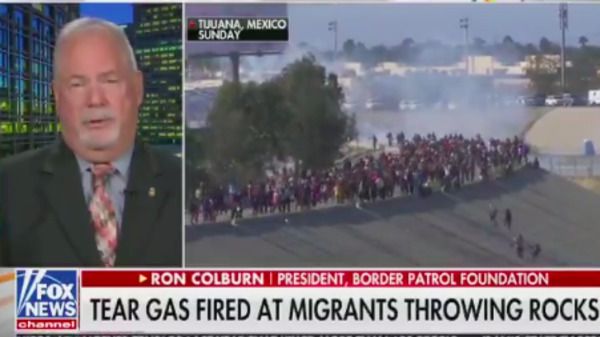 Fox news guest defends tear gas use on migrants: you can 'put it on your nachos'

Education matters: Get your child some help
Enjoy up to 5% rebate with BOC credit cards

A “Fox & Friends” guest on Monday downplayed the controversy surrounding U.S. Border Patrol’s use of tear gas against migrants in Mexico a day earlier, suggesting the disabling spray makes for a fine nachos accoutrement.

Ron Colburn, a former Border Patrol deputy chief and president of the Border Patrol Foundation, said employing the weapon against hundreds of protesting migrants at the U.S.-Mexico border on Sunday was “absolutely” warranted.

“To clarify, the type of deterrent being used is OC pepper spray,” Colburn told co-host Steve Doocy. “It’s literally water, pepper with a small amount of alcohol for evaporation purposes. It’s natural. You could actually put it on your nachos and eat it. So it’s a good way of deterring people without long-term harm.”

On Fox & Friends, Border Patrol Foundation president defends pepper spraying latinx migrants because “it’s natural. You could actually put it on your nachos and eat it.” pic.twitter.com/QLdQXqqNno

Doocy, apparently unfazed by Colburn’s bizarre reference to the Mexican dish, continued the interview without skipping a beat.

“It looks like [Mexican officials] are trying to review videotape and figure out who some of these people were who stormed the border and they’re going to deport them back to their country of origin,” Doocy told him.

News that U.S. border agents fired tear gas on hundreds of migrants protesting near the border with Mexico on Sunday sparked a public outcry. The mayhem started when a few migrants attempted to cross into the U.S. through a fence.

Children screamed and coughed as tear gas enveloped the group of migrants, according to an Associated Press reporter who was at the scene.

Colburn’s argument that the spray’s use was more than justified prompted swift backlash on Twitter.

Is this real? Have people gone this crazy? Fox News guest defends using pepper spray on migrant kids: 'It's natural -- you could put it on nachos!' https://t.co/WSW9eSvIld

Fox is already covering the natural ingredients found in pepper spray, touting it can be used on nachos. Oy. https://t.co/SkBgsSHLAc

This isn’t the first time Colburn has taken heat for making controversial statements as a guest on President Donald Trump’s favorite cable news network. In May, he claimed without evidence that a migrant caravan headed toward the U.S. through Mexico was filled with “criminals” and “pedophiles.”