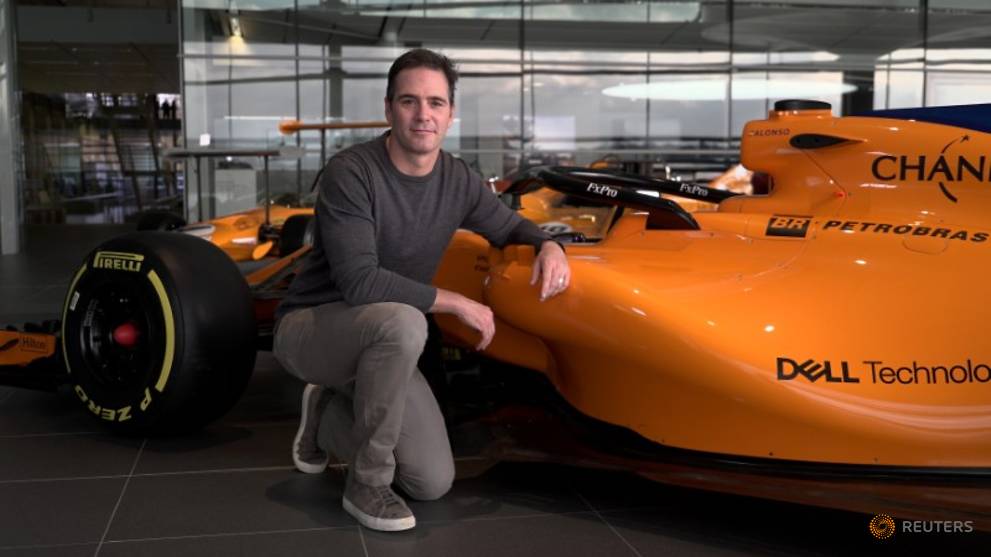 Seven times NASCAR champion Jimmie Johnson and double Formula One champion Fernando Alonso swapped race cars in Bahrain on Monday, with the 43-year-old American pretty sure he got the better of the deal.

Nascar driver Jimmie Johnson poses for a photograph with an F1 car at the McLaren Technology Centre in Woking, Britain November 21, 2018. REUTERS/Will Russell

REUTERS: Seven times NASCAR champion Jimmie Johnson and double Formula One champion Fernando Alonso swapped race cars in Bahrain on Monday, with the 43-year-old American pretty sure he got the better of the deal.

While Johnson declared the V8-powered 2013 McLaren to be "mind-blowing" in braking and acceleration, Alonso found the Hendrick Motorsports number 48 Chevrolet a blast from the past with its V8 engine and steel brakes.

"Literally on the first outing, my helmet was trying to leave my head, and I was staring at the microphone in my helmet it was so high," Johnson told ESPN at the Sakhir desert circuit south of Manama.

"I got my helmet more under control, and then it was really my eyes trying to find their way far enough ahead and far enough round the turns..."

The fun swap came a day after Alonso's last Formula One race in Abu Dhabi.

The Spaniard did a couple of initial laps in the orange Formula One car before handing it over to Johnson, who went on to do 28.

The American returned the favour with some set-up laps in his NASCAR.

"To be honest, I was supposed to only drive the NASCAR, but it made sense if I was doing the installation lap (in the F1 car) just to make sure the car was feeling OK," Alonso said of his swift return to the F1 cockpit.

"I found myself in the cockpit at 11 a.m. this morning after retiring yesterday," the Spaniard said.

Both drivers said they were impressed by the other's performance.

"I think he was really gaining time every run he was going out," said Alonso.