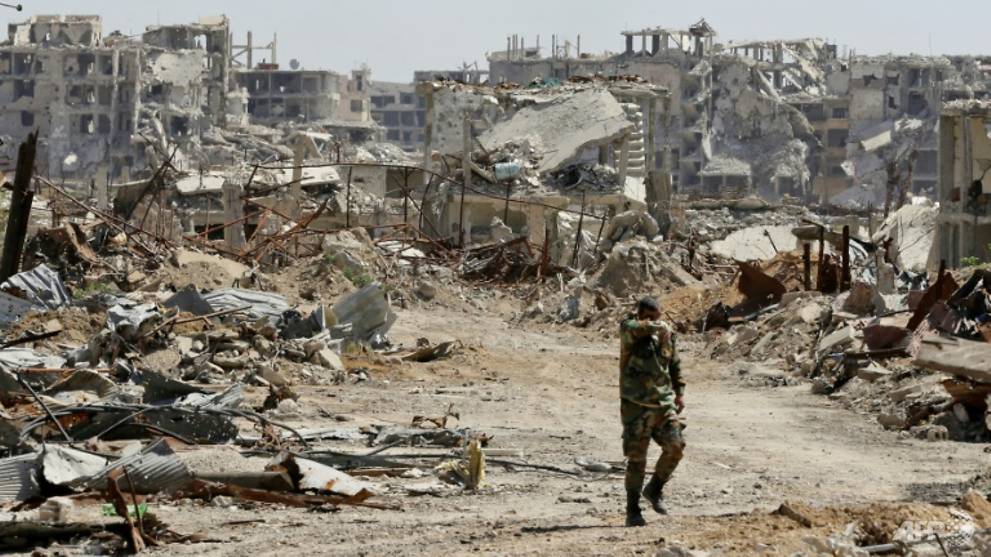 Commentary: From economic crisis and inequality to World War III

We must take seriously the possibility that the next economic crisis could lead to a large-scale military confrontation, says economist Qian Liu.

A member of Syrian regime forces walks amid the destruction in Jobar in Eastern Ghouta, on the outskirts of the capital Damascus, on April 2, 2018 (Photo: AFP/LOUAI BESHARA)

BEIJING: The next economic crisis is closer than you think. But what you should really worry about is what comes after.

In the current social, political, and technological landscape, a prolonged economic crisis, combined with rising income inequality, could well escalate into a major global military conflict.

NO GROUNDBREAKING STRUCTURAL REFORMS SINCE THE LAST CRISIS

The 2008 to 2009 global financial crisis almost bankrupted governments and caused systemic collapse. Policymakers managed to pull the global economy back from the brink, using massive monetary stimulus, including quantitative easing and near-zero (or even negative) interest rates.

But monetary stimulus is like an adrenaline shot to jump-start an arrested heart; it can revive the patient, but it does nothing to cure the disease.

Treating a sick economy requires structural reforms, which can cover everything from financial and labour markets to tax systems, fertility patterns, and education policies.

READ: Lessons on how not to tackle inequality, a tale of China and India, a commentary

Policymakers have utterly failed to pursue such reforms, despite promising to do so. Instead, they have remained preoccupied with politics. From Italy to Germany, forming and sustaining governments now seems to take more time than actual governing.

And Greece, for example, has relied on money from international creditors to keep its head (barely) above water, rather than genuinely reforming its pension system or improving its business environment.

A BUBBLE WAITING TO BURST

The lack of structural reform has meant that the unprecedented excess liquidity that central banks injected into their economies was not allocated to its most efficient uses. Instead, it raised global asset prices to levels even higher than those prevailing before 2008.

In the United States, housing prices are now 8 per cent higher than they were at the peak of the property bubble in 2006, according to the property website Zillow.

A man works on a new home for sale in Chicago (Photo: REUTERS/John Gress/File Photo)

The price-to-earnings (CAPE) ratio, which measures whether stock-market prices are within a reasonable range, is now higher than it was both in 2008 and at the start of the Great Depression in 1929.

As monetary tightening reveals the vulnerabilities in the real economy, the collapse of asset-price bubbles will trigger another economic crisis – one that could be even more severe than the last, because we have built up a tolerance to our strongest macroeconomic medications.

A decade of regular adrenaline shots, in the form of ultra-low interest rates and unconventional monetary policies, has severely depleted their power to stabilise and stimulate the economy.

If history is any guide, the consequences of this mistake could extend far beyond the economy. According to Harvard’s Benjamin Friedman, prolonged periods of economic distress have been characterised also by public antipathy toward minority groups or foreign countries – attitudes that can help to fuel unrest, terrorism, or even war.

For example, during the Great Depression, US President Herbert Hoover signed the 1930 Smoot-Hawley Tariff Act, intended to protect American workers and farmers from foreign competition. In the subsequent five years, global trade shrank by two-thirds. Within a decade, World War II had begun.

To be sure, WWII, like World War I, was caused by a multitude of factors; there is no standard path to war. But there is reason to believe that high levels of inequality can play a significant role in stoking conflict.

According to research by the economist Thomas Piketty, a spike in income inequality is often followed by a great crisis. Income inequality then declines for a while, before rising again, until a new peak – and a new disaster.

Though causality has yet to be proven, given the limited number of data points, this correlation should not be taken lightly, especially with wealth and income inequality at historically high levels.

READ: Explaining the rise of the top 1% super rich, a commentary

This is all the more worrying in view of the numerous other factors stoking social unrest and diplomatic tension, including technological disruption, a record-breaking migration crisis, anxiety over globalisation, political polarisation, and rising nationalism. All are symptoms of failed policies that could turn out to be trigger points for a future crisis.

Voters have good reason to be frustrated, but the emotionally appealing populists to whom they are increasingly giving their support are offering ill-advised solutions that will only make matters worse.

READ: A global revival of nationalists looms, as their resonance with voters grows, a commentary

For example, despite the world’s unprecedented interconnectedness, multilateralism is increasingly being eschewed, as countries – most notably, Donald Trump’s US – pursue unilateral, isolationist policies. Meanwhile, proxy wars are raging in Syria and Yemen.

Against this background, we must take seriously the possibility that the next economic crisis could lead to a large-scale military confrontation. By the logic of the political scientist Samuel Huntington, considering such a scenario could help us avoid it, because it would force us to take action.

In this case, the key will be for policymakers to pursue the structural reforms that they have long promised, while replacing finger-pointing and antagonism with a sensible and respectful global dialogue. The alternative may well be global conflagration.

Qian Liu is an economist based in China.