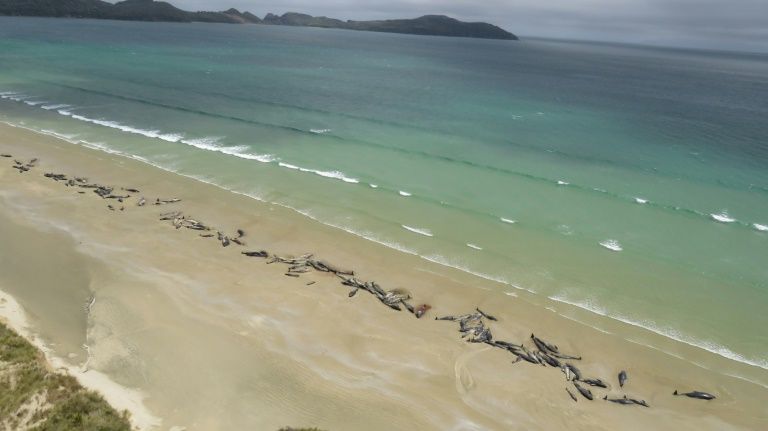 Six beached whales were successfully refloated off New Zealand Tuesday, rescuers said, after a spate of mass strandings in recent days that resulted in the deaths of dozens of marine mammals.

Wildlife rangers and volunteers used pontoons to float the killer pygmy whales -- part of a group of 12 found beached in the country's far north on Sunday -- and take them about 400 metres (437 yards) offshore.

"We are hopeful that the six whales that have been refloated will remain at sea," the Department of Conservation (DOC) department said in a statement, adding that another two whales were euthanised after continually restranding.

Two of the pod were already dead, and two more died after being found by rescuers on the North Island's west coast, with the remaining eight transported by truck to the east coast on Monday, where sea conditions were calmer.

The survival of even part of the pod was a rare success for DOC as it struggled to deal with four separate strandings in quick succession, including a sperm whale and a pygmy sperm whale in separate incidents on the North Island coast.

By far the largest was when up to 145 pilot whales were found late Saturday washed up on Stewart Island, 30 kilometres (19 miles) off the southern coast of the South Island.

US travel blogger Liz Carlson was among a group of hikers on Stewart Island that found the whales and she described her frustration at being unable to help the huge sea creatures.

"When we realised the horror of what we were seeing, we dropped everything and ran straight into the water," she posted on social media.

"Desperately we grabbed their tails and pushed and yelled, before we got hammered by them thrashing around.

"It was useless -- they were so big and heavy and the realisation we could do nothing to save them was the worst feeling I've ever experienced."

The reason whales and dolphins strand is not fully understood but factors can include sickness, navigational error, geographical features, the presence of predators, and extreme weather.