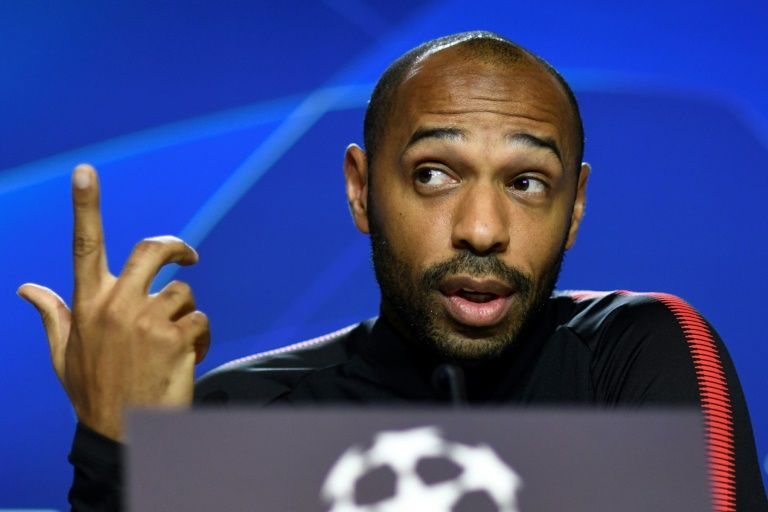 Thierry Henry said on Tuesday he has studied Diego Simeone in a bid to become an elite coach and will get an even closer look when Monaco face Atletico Madrid in the Champions League.

Henry was appointed coach of the struggling Ligue 1 club last month and endured a nightmare start, losing four and drawing two of his opening six matches in charge.

A narrow win over Caen at the weekend -- their first victory in any competition since the opening day of the league season -- has offered a glimmer of hope as Henry battles to revive a club under the threat of relegation, and in crisis off the pitch.

Henry believes Simeone, who has overseen Atletico winning La Liga and reaching two Champions League finals, is "one of the best coaches in Europe".

"For all those who have known this generation of football, Simeone has given everything for the shirt of this club, he has it in the skin," Henry said at a press conference.

"He is an extraordinary coach. For me it's an honour to find myself next to him on the bench. I have a lot to learn from someone like that, from what he does.

"It's not only about tomorrow, I have been studying him and Atletico for a long time and even more so ahead of tomorrow when we're going to face them."

Monaco sit bottom of Group A and cannot qualify for the last 16 but they could still pip Club Brugge to third place and secure a place in the Europa League.

However, with a lengthy list of injuries and a relegation scrap to contend with, Henry has pledged to field a youthful line-up at the Wanda Metropolitano.

"Enjoyment is the word, we cannot be afraid," Henry said. "This is the kind of game we all love to play, whether it's an experienced player or a young player.

"There may be some players who watched (Antoine) Griezmann win the World Cup and may find themselves playing tomorrow against him. But we are not in a dream, it is the reality.

"We have to start somewhere. I do not know who will start tomorrow but there will certainly be young players, but no problem, that's how it is."

Radamel Falcao may be among those rested as the striker returns to the club where he enjoyed arguably the most successful spell of his career.

The Colombian scored 52 goals in 68 games for Atletico between 2011 and 2013 before his form dipped during injury-plagued spells at Manchester United and Chelsea.

"Since I left, I have gone through difficult times but some happy times too," Falcao said.

"Atletico have been able to achieve stability as a club, which has allowed them to keep their best players, which they were not able to do before.

"It is always good to return, after the moments that I enjoyed here, the memories will always stay with me.

"But we have an important match and after the result we achieved last weekend, another positive result here would be good for confidence."