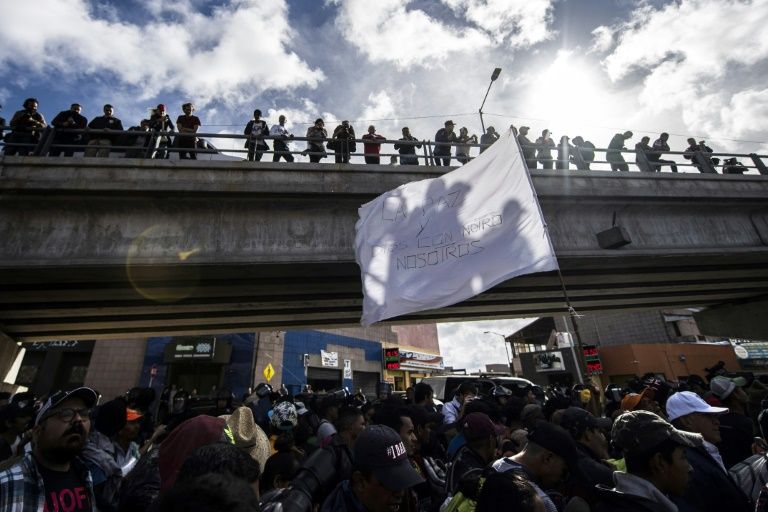 Still stinging from the tear gas that beat back their attempt to breach the US-Mexican border, members of the Central American migrant caravan are starting to lose hope, and in some cases are turning back.

The migrants have played all their cards in recent days, after more than a month's trek across Central America and Mexico -- but with little success.

Their surprise bid to rush the border en masse on Sunday ended as abruptly as it began, when US Border Patrol agents fired tear gas and rubber bullets to force them back.

And attempts to sneak across the border alone or in small groups appear to be largely failing.

That leaves the roughly 5,000 migrants in the caravan with a handful of options, equally unappealing to most: wait the months or years it could take to request asylum in the United States; settle in Mexico; or give up and go home.

Their desperation is palpable at the improvised shelter where they are staying in Tijuana, across the border from San Diego.

Living in crowded conditions, with limited toilets, disease outbreaks and two rations of food a day, many are still shell-shocked from the failed attempt by about 500 migrants to get over the chain-link border fence topped with barbed wire on Sunday.

"We thought they were going to kill us. It's going to be hard to get to the other side," said Brayan Casas, a 28-year-old from Honduras, showing the bruises he got when he, his wife and his son joined Sunday's stampede.

"They learned their lesson," an employee of Mexico's National Migration Institute told AFP at the shelter, speaking on condition of anonymity.

"They've seen they won't be able to cross easily. They're a lot less rebellious today."

US President Donald Trump has however warned of an "invasion" by a group full of "hardened criminals."

Some migrants have tried to sneak into the United States alone, without much success.

"I've tried five times already," said Danilo Mejia, 26, a skinny Honduran man in an oversized leather jacket, who says the US Border Patrol sent him back to Mexico each time.

"I thought if it was dark they wouldn't see me, but they're real watchdogs."

He says he does not have the $10,000 or so he would have to pay a human trafficker, or "coyote," to bring him into the United States.

But sneaking in through the desert alone is a perilous strategy. Hundreds of migrants die trying every year, of dehydration, hypothermia or snake bites.

Seeking asylum in the United States is not much easier.

In Tijuana, the waiting list to enter the US at an official border crossing and apply for asylum currently has more than 5,000 names on it, including caravan members and other migrants who were already in line.

And the US is backlogged with asylum cases: requests increased by 2,000 percent in the past five years, and there are currently 700,000 pending.

Arlin Gutierrez, 40, traveled here from Honduras with her three young children, and is unsure what to do next.

"We'd have to wait more than three months to be called (from the asylum wait-list), and who knows how much longer for our case to be resolved," she said, shaking out her baby's disposable diaper to use it again.

"We can't wait for so long, living here like animals."

Trump issued an executive order earlier this month barring migrants who sneak across the border from filing asylum claims. That policy has been temporarily blocked by a federal judge.

Undaunted, Trump tweeted Saturday that migrants seeking asylum will have to remain in Mexico while their claims are processed -- though Mexico has not publicly agreed to such a plan.

Facing a hostile welcome and little hope, a growing number of migrants have decided to turn back.

On Monday, a line formed outside a tent set up by the International Organization for Migration where migrants could ask to be sent home voluntarily. More than 80 requested help from the United Nations body that day, up from just a handful in previous days, officials said.

In all, 1,700 caravan migrants have asked to be sent home since the caravan set out from San Pedro Sula, Honduras, on October 13, according to officials.