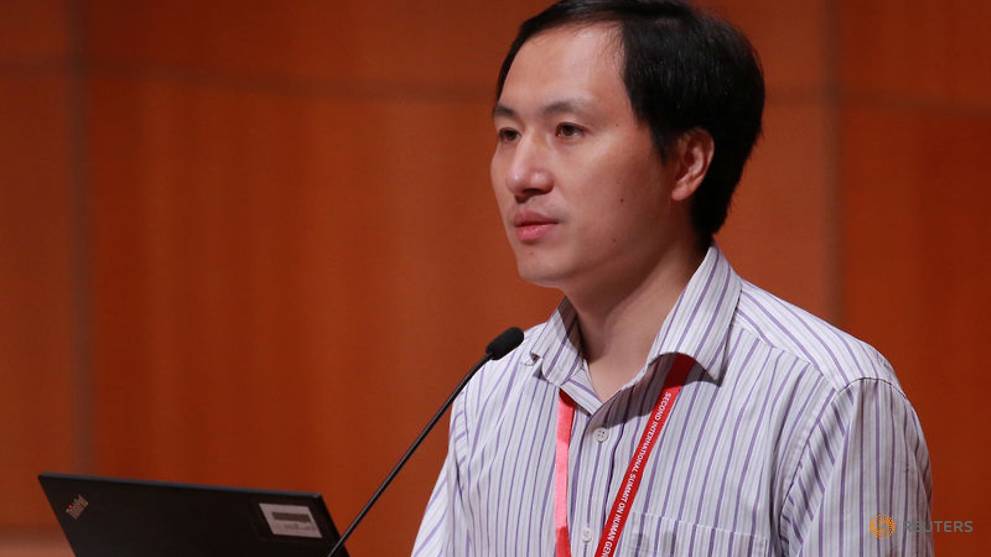 A Chinese scientist at the centre of a controversy over what he claims are the world's first genetically edited children apologised on Wednesday for the result being leaked unexpectedly as he detailed his findings at a conference in Hong Kong.

Scientist He Jiankui attends the International Summit on Human Genome Editing at the University of Hong Kong in Hong Kong, China November 28, 2018. REUTERS/Stringer

HONG KONG: A Chinese scientist at the centre of an ethical storm over what he claims are the world's first genetically edited babies said on Wednesday he is proud of his work and revealed that another volunteer is pregnant as part of the research.

He Jiankui, an associate professor at Southern University of Science and Technology in Shenzhen, China, addressed a packed hall of around 700 people attending the Human Genome Editing Summit at the University of Hong Kong.

"For this case, I feel proud. I feel proudest," He said, when challenged by several peers at the conference.

"This study has been submitted to a scientific journal for review," He said. He did not name the journal and said his university was unaware of his study.

He, who said his work was self-funded, shrugged off concerns that the research was conducted in secrecy, explaining that he had engaged the scientific community over the past three years.

In videos posted online this week, He said he used a gene-editing technology known as CRISPR-Cas9 to alter the embryonic genes of twin girls born this month.

He said gene editing would help protect the girls from infection with HIV, the virus that causes AIDS.

But scientists and the Chinese government have denounced the work that He said he carried out, and a hospital linked to his research suggested its ethical approval had been forged.

The conference moderator, Robin Lovell-Badge, said the summit organisers were unaware of the story until it broke this week.

CRISPR-Cas9 is a technology that allows scientists to essentially cut and paste DNA, raising hope of genetic fixes for disease. However, there are concerns about safety and ethics.

The Chinese Society for Cell Biology in a statement on Tuesday strongly condemned any application of gene editing on human embryos for reproductive purposes and said that it was against the law and medical ethics of China.

More than 100 scientists, most in China, said in an open letter on Tuesday the use of CRISPR-Cas9 technology to edit the genes of human embryos was dangerous and unjustified. "Pandora's box has been opened," they said.

He's research focuses on genome sequencing technology, bioinformatics and genome editing, according to his biography on the summit's website.

He received his PhD at Rice University in Houston, Texas, and worked as a postdoctoral research fellow in Stephen Quake lab at Stanford University according to the site.

He, who said he was against gene enhancement, said eight couples were initially enrolled for his study while one dropped out. The criteria required the father to be HIV positive and the mother to be HIV negative.

David Baltimore, President Emeritus; Robert Andrews Millikan Professor of Biology, spoke after He's speech, saying it was irresponsible to have proceeded until safety issues were in order.

"I don't think it has been a transparent process. Only found out about it after it happened and the children were born," he said.

He Jiankui said his results could be used for millions with inherent diseases. He said he would monitor the two newborns for the next 18 years and hoped they would support continued monitoring thereafter.

Shenzhen Harmonicare Medical Holdings Limited, reported by media as being involved in He's project, sought to distance itself by stating the hospital never participated in any operations relating to the gene-edited babies and no related delivery had taken place.

In a statement published to the Hong Kong stock exchange on Tuesday, the group said preliminary investigations indicated the signatures on the application form circulated on the internet are "suspected to have been forged, and no relevant meeting of the Medical Ethics Committee of the hospital in fact took place".