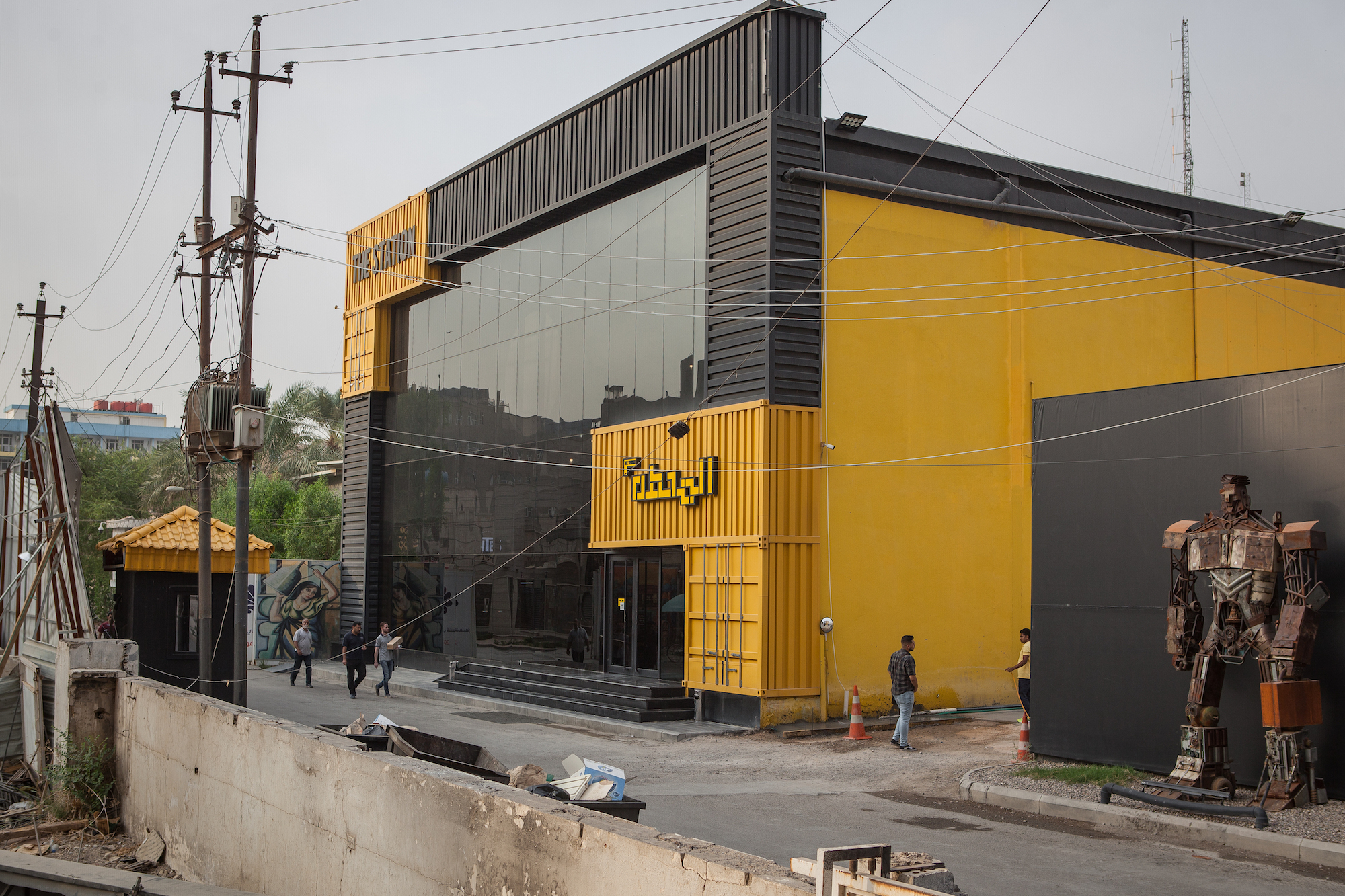 At just 18 years of age, Haitham Mohi offers tailor-made visual marketing and brand-identity services to a range of tech-savvy customers in the Iraqi capital. Alongside his two business partners, Mohi operates out of a trailblazing co-working space to share ideas and network with other entrepreneurs.

“We get benefits from interacting together. The Station is a center-point,” Mohi told Asia Times, referring to what he says is Baghdad’s first hub for entrepreneurs.

Launched as a co-working space in February 2018, it is now a collection of different working areas that offer Iraqi entrepreneurs a platform to structure and expand their businesses.

In the words of co-founder Ali Tariq Mostaf, The Station is a “lighthouse” serving as a beacon for creatives in the darkness of Iraq.

To be eligible to be part of this unique 35-desk hub, startups must have their business plan validated by The Station’s selection team and undergo a rigorous admissions process.

Supported by Awad Group, the Dutch embassy in Iraq and Deutsche Gesellschaft für Internationale Zusammenarbeit (GIZ), The Station charges every business owner a monthly fixed rate of $100 per desk.

Outside The Station, a landmark shared space for tech entrepreneurs and artists in Baghdad, Iraq. Photo: S. Castelier

When a company reaches five employees, it should make way for someone else.

“I’d really love to join because it even helps you to find potential business partners,” said Ali Jawad Abdul Kadhim, a young Iraqi entrepreneur attending a conference at The Station. Kadhim says he has invented an energy drink without negative side-effects.

In a wish to offer further services, The Station aims to open a business accelerator program in the coming months. Mentorship, branding, marketing, assistance in business plan writing, connections with banks and major corporations will be included.

“We don’t want to be only a location, we also want to spread the entrepreneurship mindset across Iraq,” Mostaf said.

Further to the north in Iraqi Kurdistan, two similar initiatives support innovators in the cities of Erbil and Sulaymaniyah. One of them, Five One Labs, has a special focus on refugees and conflict-affected entrepreneurs.

An Iraqi entrepreneur talks at a conference at The Station in Baghdad, Iraq. Photo: S. Castelier

One obstacle Iraqi entrepreneurs say they face is a lack of understanding from the larger society when it comes to careers in innovation.

“Entrepreneurship is still a relatively new word in Iraq and as it involves financial risks people feel afraid of it,” said Kadhim, who says he has spoken at length with his family to prove the feasibility of his ambitions.

People attend a conference at The Station. Photo: S. Castelier

Universities, interviewees said, tend to guide students toward the stability offered by government jobs. Entrepreneurship therefore remains an elitist track taken by a handful of people.

“Rather than Uber or Facebook, we really need a local success-story to inspire Iraqi entrepreneurs,” Mostaf said.

It provides a technological solution to reassure parents who want to track their children on the way to school. In operation since September 2018, Al Muraqib serves 3,000 students. A turnover of $80,000 with an 80% return is expected next year, and in the long run, it targets a market of thousands of private schools operating across Iraq.

Based at The Station, Ameer enjoys meeting other creative Iraqis to develop business ideas in spite of the difficulties.

“Businessmen all over the world face obstacles, but in Iraq, it is even more so,” he told Asia Times, referring to the unstable political situation, insecurity, unreliable public services, and irregular business practices.

The World Bank ranks Iraq at 168 out of 190 countries for ease of doing business.

According to Ameer, Al Muraqib has not been affected by corruption but he says several of his friends had to pay bribes to register their businesses. Transparency International ranked Iraq as the 11th most corrupt country in the world.

And yet, in less than a year, The Station has gathered an active community heartedly committed to the project. Pushing for better business practices, it also encourages startups to create employment to support Iraq’s economy.

Next to Ameer’s desk, Amna Al Qoch claims that millions of dates are lost every year because people with palm trees in their yards and gardens do not fully harvest them. Co-founder of Ikfil Nakhla, she offers an all-inclusive maintenance service aimed at reviving the date industry in Iraq, which once produced three-quarters of the world’s dates.

The co-founders of Ikfil Nakhlah, a business project that aims to revive the dates industry in Iraq by providing services to palm-tree owners. Photo: S. Castelier

Like 2,500 other young Iraqis, Al Qoch was trained with her two business partners by the United Nations Development Program (UNDP). “None of us holds a degree in economy, consequently, improving our entrepreneurship skills and behavior in terms of business was important,” she told Asia Times.

Unlike other entrepreneurs, the team successfully convinced a financial institution, the Trade Bank of Iraq, to back Ikfil Nakhla with an interest-free loan. But generally speaking, Iraqi banks remain largely reluctant to finance innovators to prioritize traditional businesses.

On top of that, countless entrepreneurs neither have a guarantor or know how to write a clear business plan, both of which are required by the bank sector.

That could be changing.

According to Dhafer Hasan, a project manager for UNDP Iraq, an initiative led by the new prime minister and the Central Bank of Iraq has allocated US$840 million to support small-scale innovation projects with a 4% interest loan.

Thanks to its first-round funding, Ikfil Nakhla can support around 300 palm trees in Baghdad, which each family should subscribe to for an annual package at a price varying from US$60 to $85. “All year long, our teams harvest to fulfill our duty: bring Iraqi dates back to our local markets,” Al Qoch said.

In the foreseeable future, Ikfil Nakhla expects to expand its services all across Iraq and serve other Middle Eastern countries.

As for The Station, it plans to open a branch in Mosul and Basra in 2019 to help Iraqis to dream big a year after the fall of the Islamic State in the country.