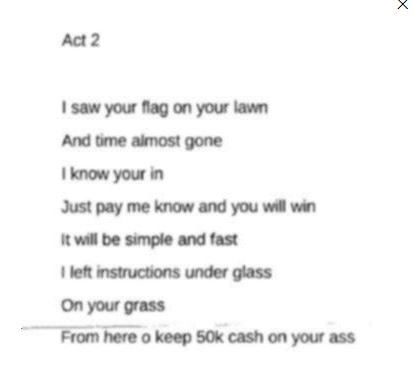 (Newser) – If the Rickety Ranch sounds to you like the name of a place that might appear on a TV show, you're right in one respect: There's plenty of drama going on around it. Officials say the Hollis, NH, farm has been on the receiving end of a bizarre extortion attempt that's involved rhyming riddles, vandalism, and animal cruelty. Now, the FBI is offering $10,000 for information that leads to an arrest. Per the FBI, owners Gary and Diana Bergeron have for two years received letters seeking $250,000 and seen thousands of dollars of damage done to their property. CBS Boston reports that in January, a fire burned a barn to the ground and totaled a nearby truck; farm animals and pets have been injured and even killed. More on the case:

What the FBI has to say in a statement: "The vicious shakedown of this family and the use of violence to intimidate them will not be tolerated."

The New Hampshire Union Leader reports the FBI is keeping certain details under wraps, like how many letters were sent and the specifics on the animals (though the Washington Post reports horses had their tails cut off), though it did release photos of two spaniels that were not killed but were harmed.

Read the next page

Fox News has the text of one of the error-studded letters the family received: "Act 2 / I saw your flag on your lawn / And time almost gone / I know your in / Just pay me know and you will win / It will be simple and fast / I left instructions under glass / On your grass / From here o keep 50k cash on your a--." CBS Boston reports all the letters have been composed in rhyme.

The letter writer suggests that if the family hands over the money, their "ongoing disputes" with the town will be settled. The Union Leader explains that might reference a lawsuit the town filed against the Bergerons regarding code violations tied to an unpermitted "accessory dwelling" construction on the property. The chair of the Hollis Board of Selectmen said town officials aren't involved in what he calls the "nonsense."

FBI Special Agent Brian O’Hara described the family as "living in fear" in comments to CBS Boston. He continues, "It's been a tough, tough haul for them because the stuff has been constant and there are some days where it's one, two, three days in a row. Then there will be lull and then something else. Some of the stuff has been significant and people have been lucky to not [have] been injured or killed."

As for the ranch itself, it takes in animals that would often otherwise be euthanized and has kids—many with disabilities or troubles—learn to care for them. Reads its website, "As we say, 'not only are our fences "rickety" but the animals and children all have some rickety too.'"

(Someone writing creepy letters turned a $1.3 million dream home into a nightmare.)