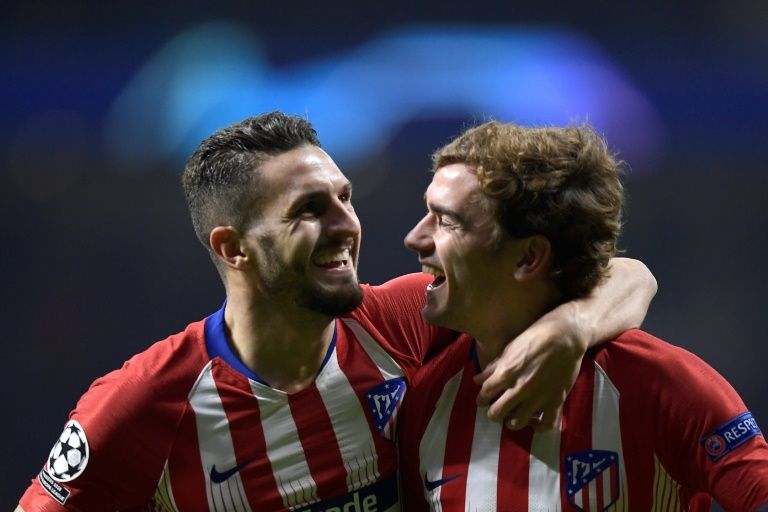 Atletico Madrid moved one step closer to their dream Champions League final on home turf by beating Thierry Henry's Monaco 2-0 on Wednesday to secure their place in the last 16.

Atletico could hardly have imagined a more straight-forward passage into the knock-out stages as a struggling Monaco side, ridden with injuries and focused on avoiding relegation from Ligue 1, offered precious little resistance at the Wanda Metropolitano.

A rout looked possible when Koke and Antoine Griezmann put Atleti two up within half an hour but they eased off and Monaco could have pulled a goal back, only for Radamel Falcao to miss a penalty against his former club.

Stefan Savic was sent off after receiving a second yellow card for the handball.

It was a disappointing end for Falcao, who had been presented with a plaque before kick-off and cheered by the home fans when introduced as a substitute in the second half.

"I will hold onto this memory, of the fans always showing me affection, I am happy and grateful to all of them," Falcao said afterwards.

To return here for the final on June 1, Atletico will have to beat better opponents than this but, after a slow start, their season appears to be taking shape. They have now lost only once, albeit a thumping by Borussia Dortmund, in 16 matches.

"We needed to take this step forward," coach Diego Simeone said. "Apart from the game in Dortmund, where we were a mess at the end, we've had a really good tournament so far."

Dortmund could yet snatch top spot in Group A, particularly given they face Monaco last, with Atletico owning the slightly tougher final assignment away to Club Brugge.

Monaco, meanwhile, cannot even trump Brugge to third and a place in the Europa League, even if they, and Henry, have more serious concerns domestically.

"Going out of Europe is neither a source of regret nor relief," Henry said. "Our real battles will come now against Montpellier and Amiens in the league."

At times, this match resembled a cup tie between a giant and an opponent two or three tiers below, but Henry must have expected as much when he rested key players, including Falcao, and fielded four teenagers in his starting line-up.

"They saw Griezmann lift the World Cup and now they're going to play against him," Henry had said on Tuesday.

After beating Caen for their first win in his seven games, any momentum Monaco had, took a knock. Twelve injuries and 10 points from 14 league games perhaps gave Henry little choice.

The last thing a youthful team needs away from home, against one of Europe's toughest opponents, is to concede early, not least due to a heavy dose of misfortune.

Koke was given too much time to line up his shot but the deflection off 17-year-old Benoit Badiashile was cruel, and left goalkeeper Diego Benaglio stranded.

Thomas Lemar's curling free-kick grazed the outside of the post but as Atletico's dominance became entrenched, their intensity slackened too.

Griezmann doubled the lead in the 24th minute, receiving on the half-turn and slipping Angel Correa free down the left. Correa's twisting run put Jemerson on the ground, and he returned to Griezmann to touch into the far corner.

Falcao came on to cheers in the second half and as Atletico settled for the win, Monaco a respectable defeat, he looked as surprised as anyone to be taking a penalty with eight minutes left.

Youri Tielemans' shot had been blocked by the arm of Savic, who saw a second yellow card, even if replays suggested the decision was harsh.

Any hopes of the most unlikely of comebacks were dashed, however, as Falcao sidefooted wide to deny himself a happy return and Monaco a morale-boosting finish.