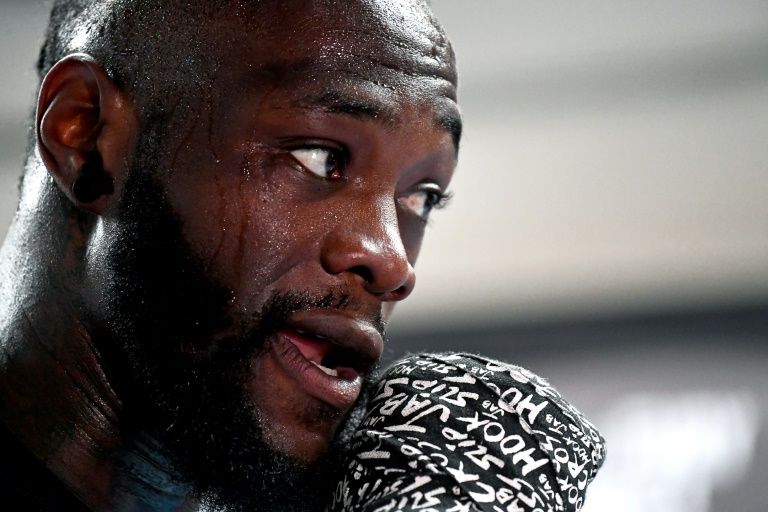 Sparks fly as Wilder, Fury face off ahead of title fight

Deontay Wilder and Tyson Fury needed to be separated here Wednesday as tempers boiled over in an explosive final press conference before their heavyweight title showdown.

World Boxing Council heavyweight champion Wilder and Fury will collide in a high-stakes showdown at the Staples Center on Saturday which could see the winner advance to a money-spinning unification bout.

After trading verbal blows before reporters on Wednesday, the two unbeaten heavyweights engaged in an angry face-off that threatened to erupt into a full-scale brawl.

British challenger Fury finished the press conference stripped to the waist and offering to engage with Wilder as the two men hurled insults.

Fury, the trash-talking "Gypsy King", appeared to have clearly rattled Wilder, who looked by far the angrier of the two fighters.

The 30-year-old Fury, who has battled back from depression and drug abuse to land his shot against Wilder, opened by stating bluntly he expected to knock out the American champion (40-0, 39 knockouts).

"This swagger is not genuine, it's fake - a snide and a fraud. I look at him and don't see a bad man, I see a pretender."

Wilder however angrily confronted Fury as the two men faced off on the dais, contrasting the two fighters' respective heritages in an expletive-laden rant.

Fury, who laughed and joked throughout, later said he believed he had rattled Wilder.

"He looks very nervous. I didn't initiate all that. His team are nervous and agitated because they know he's going to lose," Fury told reporters.

"He knows he can't outbox me, so he's trying to get me all involved emotionally. He feels the need to shout and scream and all that, but it was what it was."

"I don't think we should bring this fight into a battle of races, or a battle of cultures or all that," Fury said.

"This is above all that. We're fighting for the most gentlemanly, prized, heavyweight championship of the world. He instigated all that. I didn't get up there and start screaming and shouting in his face.

"This isn't a battle of who's been persecuted longest. This is a battle between Tyson Fury and Deontay Wilder. It's not a battle of races of cultures."