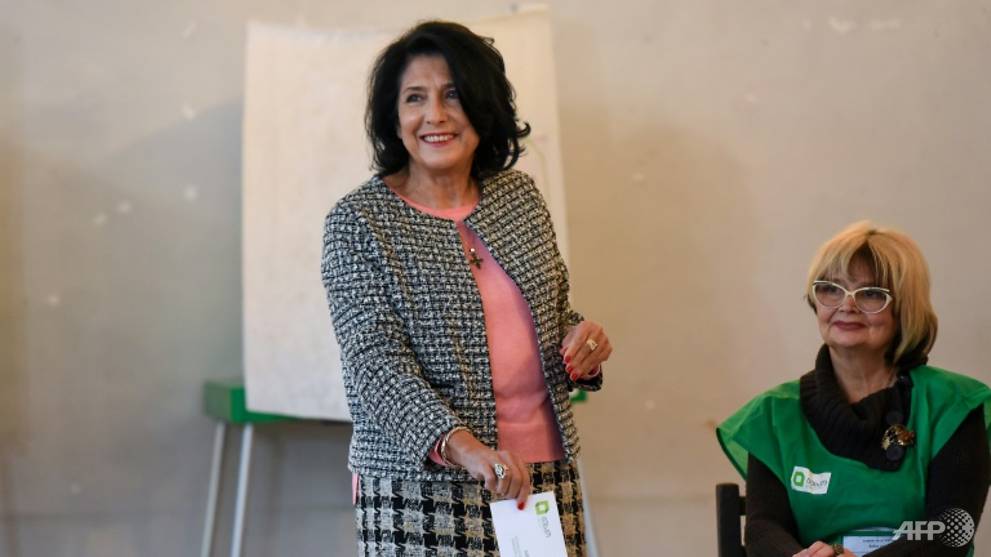 With all votes counted, the French-born ex-diplomat had taken 59.52 per cent of the vote in Wednesday's second round run-off, the election commission said.

The election was seen as a test of Georgia's democratic credentials as the Caucasus nation seeks European Union and NATO membership.

It was also a trial run for more important parliamentary elections in 2020, when the ruling Georgian Dream party is set to face off against a range of opposition parties.

Georgian Dream - the creation of billionaire tycoon Bidzina Ivanishvili who many see as the country's de facto ruler - backed Zurabishvili in the presidential vote.

"The oligarch has stamped out Georgian democracy and the institutions of elections," he said on the pro-opposition Rustavi-2 television channel, referring to Ivanishvili.

"I urge Georgians to defend our freedom, democracy and the law. I call on you to start mass peaceful rallies and demand snap parliamentary polls."

Saakashvili swept to power in 2004 in a mass protest movement known as the Rose Revolution but, after a disastrous 2008 war with Russia, fled the country in 2013 and has since been stripped of his citizenship.

He was sentenced in absentia to six years in prison for abuse of office, charges he rejects as politically motivated. He now lives in the Netherlands.

Tensions increased ahead of the second round as the opposition accused the government of voter intimidation and claimed that ruling party activists had attacked Vashadze campaign staff.

Zurabishvili in turn said she and her children had received death threats through text and voice messages from people affiliated with the UNM.

Rights groups have accused government officials of vote-buying on a "widespread" and "unprecedented" scale and of election fraud, including through the alleged printing of fake ID cards.

Opposition supporters will be watching for reports from foreign election monitors, including from the Organisation for Security and Cooperation in Europe, to see if their claims of voter fraud are supported.

OSCE observers were to hold a press conference in Tbilisi later on Thursday.

Georgians vote in the capital Tbilisi in an election seen as a trial run for crucial parliamentary polls in 2020. (Photo: AFP/Vano Shlamov)

Street protests against the results could shake the small ex-Soviet republic, which has seen civil wars, mass demonstrations and unrest since gaining its independence in 1991 on the break-up of the Soviet Union.

A smooth presidential transition, however, would be welcomed by many as a sign of stability in Georgia, which is emerging as a tourism hotspot and hopes for more foreign investment.

Zurabishvili, a 66-year-old independent lawmaker, is the daughter of refugees who fled Georgia in 1921 for Paris after the country's annexation by the Red Army.

Her career in France's foreign service culminated in a posting to Tbilisi, where then-president Saakashvili appointed her foreign minister.

But Zurabishvili quickly made enemies among the parliamentary majority, with MPs and some senior diplomats accusing her of arrogance and impulsiveness.

When she was sacked after a year in the job, thousands took to the streets of the capital to protest her dismissal.

The vote was Georgia's last direct leadership poll as it transitions to a parliamentary form of governance.

The first round on Oct 28 saw Zurabishvili take 39 per cent of the vote, against 38 per cent for Vashadze.

More than 3.5 million people were eligible to vote in the election and turnout was 56.23 per cent.