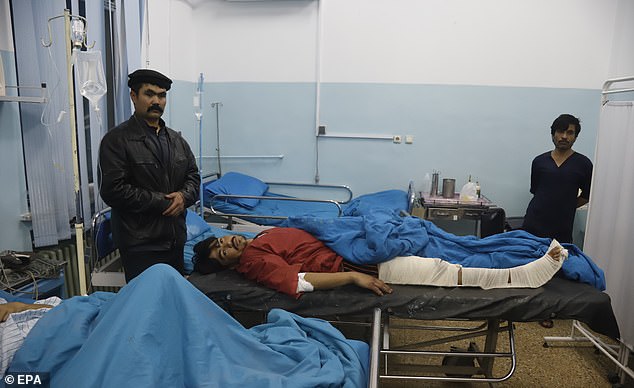 A British man killed in a bomb blast in Kabul has been named as Luke Griffin.

The 33-year-old died along with five others in the bomb and gun attack in Afghanistan, late on Wednesday.

The Briton from the Merseyside area, who had worked for British security firm G4S for eight years was killed in the attack on the security firm's compound.

The Briton died alongside four Afghan workers after the Taliban launched a bomb and gun attack on a compound belonging to G4S.

Five other Britons were among 32 people hurt in the attack which included 11 Nepalese and 11 Afghans, police sources told the New York Times.

Luke Griffin, 33, was named as the Briton killed alongside four others in Afghanistan when a G4S compound was attacked

The 33-year-old, from the Merseyside area, had worked for the company for eight years when he was killed

According to social media Mr Griffin became a father in December 2106.

A Taliban suicide bomber detonated a huge car bomb at the entrance of the compound belonging to British security firm G4S before three others stormed in.

All of the terrorists were killed in the ensuing gun battle.

Colonel Bismillah Taban, the local police chief, said the majority of those killed and injured inside the compound were hurt in the initial blast.

Images released on Thursday show a huge crater where the gates used to stand after a suicide bomber detonated his explosives.

A G4S spokesman said: 'It is with great sadness that we can confirm that five of our employees were killed and 32 were injured, five of them seriously, in an unprovoked, criminal attack on one of our compounds in Kabul on 28 November 2018.

'Next of kin have been informed and our thoughts at this difficult time are with the loved ones of those who have died and been injured, and our brave team in Afghanistan who have lost colleagues and friends.

'We are offering support and counselling to all of those affected.'

A British Foreign Office spokesman added: 'We are working closely with G4S following the attack on its facilities in Kabul, which led to the death of five of its workers, including one British national.'

The Taliban claimed responsibility for the attack saying it was in retaliation for an earlier US airstrike which killed at least 30 people, including civilians and children.

Afghan special forces had come under heavy fire from Taliban fighters during a night operation in Helmand province.

They then requested airstrikes against Taliban positions, prompting the Americans to swoop in.

Afghan and Western officials said 16 members of the Taliban were killed, but admitted there were civilian casualties. They put the number at 16, but locals reported 22 civilian deaths.

The complex attack on a well-protected site underlines how insecure Kabul remains despite efforts by the United States and the Afghan government to open peace talks with the Taliban to end more than 17 years of war.

The insurgents' main spokesman Zabihullah Mujahid said the attack had caused heavy casualties and had been launched in retaliation for casualties caused by security forces in the southern provinces of Helmand and Kandahar.

G4S, one of the world's biggest security groups, is one of a number of foreign security contractors operating in Afghanistan and provides guards for the area around the British embassy.

An official from the public health ministry said 11 wounded had been taken to city hospitals and reporters saw at least one dead body but gathering accurate casualty figures was hampered by the continuing fighting.

An Afghan injured man receives medical care in hospital. Last week, more than 50 people were killed in Kabul when a suicide bomber targeted a banquet hall

Earlier the president, who faces a re-election battle next year, told a U.N.-sponsored conference in Geneva of plans to appoint a team to seek a peace deal, which he said would take at least five years to implement.

Efforts to open talks with the insurgents have picked up following the appointment of U.S. special peace envoy Zalmay Khalilzad, but the violence that kills thousands every year has continued.

Three U.S. service members were killed close to the central city of Ghazni on Tuesday and at least 30 Afghan civilians were killed in a U.S. air strike overnight, officials and local residents said.

Last week, more than 50 people were killed in Kabul when a suicide bomber attacked a banquet hall where a meeting of religious leaders was taking place.

Security officials have warned that violence is likely to escalate alongside peace moves as the Taliban seeks to strengthen its position before any formal negotiations.