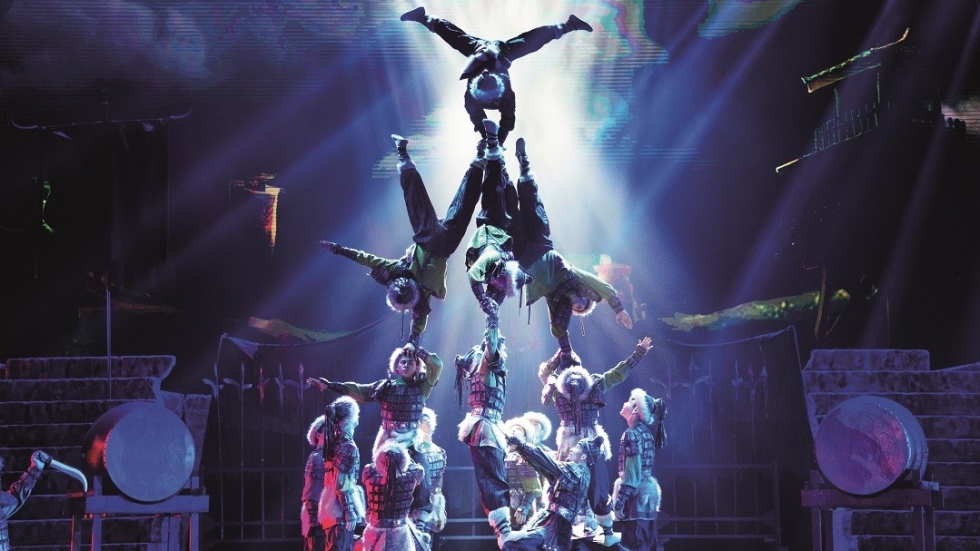 Blood, sweat and tears: behind the scenes of Chinese acrobatic extravaganza

Once upon a time, a king sent his two sons away to two of his country’s rivals as hostages in exchange for peace for his prosperous kingdom.

However, when the king died a few years later, the kingdom’s enemies raced to send their hostage princes back to claim the throne – and gain control for themselves.

One of the princes arrived in his homeland first and became king. But his reign of terror brought enormous suffering to the people. Having witnessed the evil deeds of the new king, the other prince decided to fight his brother and free his countrymen.

Such is the tale inspired by the legend of Loulan, an ancient kingdom located along the Silk Road.

To be an acrobat, there is a mixture of skills you have to develop. A segment lasting a few minutes requires a long time of practice

The story has been told many times, in various versions over the course of history, with one of the interpretations now coming to Hong Kong in the form of an acrobatic show.

The Xinjiang Production and Construction Corps Acrobatic Troupe will perform Loulan Dream in the city on December 23 and December 25 and 26 as part of the Cheers! Series presented by the Leisure and Cultural Services Department.

The 120-member troupe, founded in 1951, has enthralled international audiences in performances throughout Asia and in Europe and South America.

While the extreme bodily movements and tricks that defy the laws of physics promise to wow Hong Kong audiences, contemporary acrobatics involves more than simply challenging the limitations of human anatomy.

The storytelling and theatrical elements of an acrobatic show are gaining increasing importance in modern day performances.

“A theatrical journey takes the audience in,” Corina Sucre, 35, of The Acrofamily, one of a handful of acrobatic troupes based in Hong Kong, says.

“You may love, you may cry. And when you walk out of the theatre, you begin to reflect your own life.”

Daniel Sierralta, 31, Sucre’s husband and partner in The Acrofamily, says: “The theatrical components make an acrobatic show more relevant. It is not just entertainment.”

Originally from Venezuela, Sierralta and Sucre have been living and performing in Hong Kong for nearly seven years, together with their nine-year-old daughter Ainara, who began her training at a very young age.

Sierralta and Sucre say that acrobatics is a combination of gymnastics, dance, and tricks.

Strength, flexibility, elegance and grace are the elements that make an acrobat shine on the stage.

People from around the world have been applauding acrobatics and circus arts for centuries, but the traditional form of acrobatics can no longer satisfy the crowd, particularly after Canada’s Cirque du Soleil has achieved enormous global success with stunning displays that have spoiled audiences.

Stage presentation, storytelling, and theatrical components have become essential as audiences seek emotional connections with the performance, just like going to a Broadway show, Sierralta says.

Gymnastics provides foundational training for many acrobats because “you need to be very aware of your body in space and be very flexible and agile”, he says.

Dance is also a key element, in the form of acro dance – fusing acrobatics and dance – says Sucre, who was trained as a contemporary dancer.

Acrobatics is teamwork: you have to build up the trust, get to know each person in the team, their weight and their movements to get to work together

“But the biggest difference between dance and acrobatics is that as a dancer, your body is still on the ground,” she says.

“An acrobatic show is the only place where you can see a human fly in the air.”

Hence aerial performances often play a starring role in acrobatics, as they give the audience an illusion of flying – the eternal dream of human beings.

Sierralta, who has lived and studied at the Wuqiao Acrobatic Art School of Hebei in China, specialising in aerial rope techniques, says acrobats of Chinese troupes are known around the world for their impeccable skills and extreme tricks.

The audience at Loulan Dream will be expecting a feast of aerial performances.

Suspending bodies in the air with the aid of apparatuses such as a trapeze, rope, wire, aerial hoops and aerial silk will be a major highlight of the poetic show that revives the allegory of a long lost kingdom. Acro dance, including acrobatics such as a front and back walkover, flips, hand-walking and handstands, will be other highlight.

A theatrical journey takes the audience in. You may love, you may cry. And when you walk out of the theatre, you begin to reflect your own life

To bring the legend of the lost kingdom alive, the troupe’s choreographers and musicians made an expedition to the ruins of Loulan, located in the remote areas of Xinjiang province, to research the history and cultural elements of the area, before the show’s production in 2016.

The music score and costumes tailor-made for the show were inspired by the history of the Silk Road – the ancient network of trade routes that connected the East and West – and the nomadic culture of ancient western China.

Sierralta and Sucre stress that acrobats do not work alone and that the success of a show requires a great deal of trust among partners.

Acrobats also have to be extremely disciplined with their bodies, observing a strict and healthy diet to maintain a physique that is fit for performing.

“Acrobatics is teamwork: you have to build up the trust, get to know each person in the team, their weight and their movements to get to work together,” Sucre says.

“You need to trust your own ability, your own body and your partner, otherwise you are putting each other in danger.”

Hong Kong audiences will be able to witness such high levels of trust when they watch Loulan Dream. The Xinjiang troupe says it will be bringing to Hong Kong highly experienced acrobats of various ethnicities who have been performing together for more than a decade.

Many of these performers began training from the age of seven.

“To become an acrobat, there is a mixture of skills you have to develop,” Sierralta says. “To perform a segment that lasts for just a few minutes of stage requires a long time of practice.”