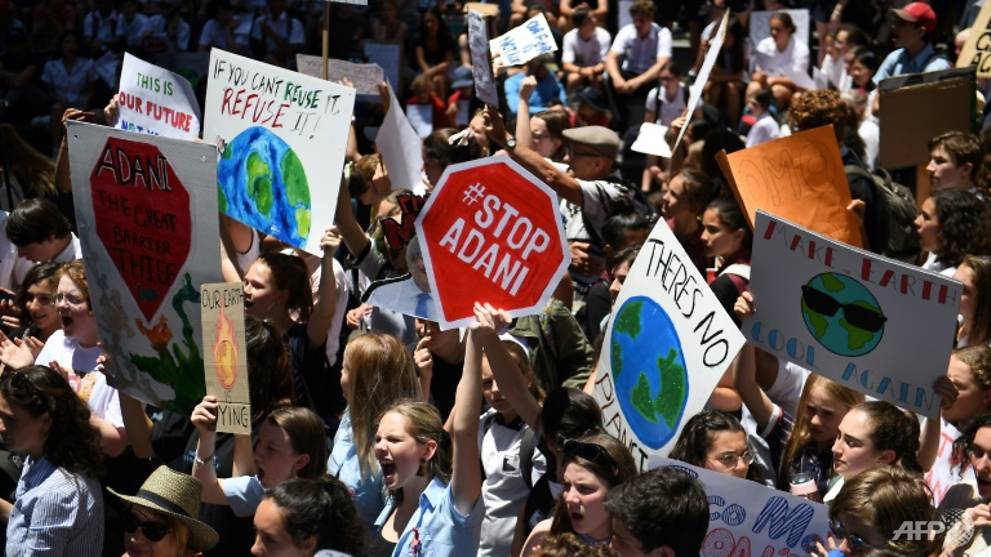 The demonstrations were held as more than a hundred bushfires blazed in scorching temperatures in the northeast and a day after Indian mining firm Adani vowed to go ahead with a massive and controversial coal mine.

Primary and secondary students rallied in state capitals and rural areas across the country, in defiance of Prime Minister Scott Morrison who earlier said kids should stay in the classroom.

"Our prime minister thinks we should be in school right now and maybe you should be," 13-year-old student Siniva Esera told a crowd of more than a thousand in Sydney.

"But how can we sit by and not do anything to protect the future of this planet," she added, to a rapturous applause.

Morrison told parliament earlier in the week that the government was committed to tackling climate change, "but I'll tell you what we are also committed to: kids should go to school".

Students creatively rebuked the prime minister, who goes by the nickname ScoMo, with humorous banners saying, "I hate ScoMo more than I hate school".

They also carried placards calling for the government to block the Adani mine project, a day after the Indian mining firm had announced it would go ahead with a scaled-back version of the coal mine in northern Queensland.

"If we don't stop temperatures going over two degrees we won't have the Great barrier reef, Antarctica will melt and there will be no such thing as polar bears," 11-year-old Lucie Atkin-Bolton told the crowd.

"My life will be so much more complicated than my parents' life, because of one simple thing: climate change."

The protests capped off a week of brutal weather in Australia.

More than a hundred fires continued to blaze Friday across Queensland state amid an unprecedented scorching heatwave.

The crisis forced hundreds to flee their homes Wednesday at its peak.

On the same day, in the neighbouring state of New South Wales, Sydney was hit by severe thunderstorms and heavy rainfall forcing the cancellation of flights, closure of rail lines and leaving motorists stranded on flooded roads.

Scientists this week also launched the largest-ever attempt to regenerate the endangered Great Barrier Reef, where large swathes of coral on the 2,300-kilometre (1,400-mile) reef have been killed by rising sea temperatures linked to climate change.

Of course the kids will do that. Anything to change fm the normal routine of sleeping (oops I mean studying) in class ! 🤪😜😴😉😵