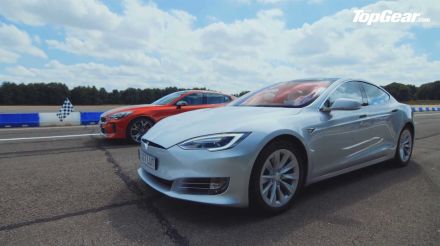 Thirst for love? Sign up here to find your date!
Survey: Which part do you want to lose weight most?

It's a good old petrol vs. electric drag race. Place your bets.

Ever since the Tesla Model S first made its debut back in 2012, it’s been leaving its competitors for dead when it comes down to all-out acceleration. In the name of science, Top Gear brought out a Kia Stinger GT S and the slowest Model S you can buy and lined them both up for a drag race. Last year, they put the Model S P100D up against thePorsche 911 R. Though being down on power, the 911 is lighter than the Tesla, but the result was inevitable with the P100D absolutely crushing the R in the quarter-mile.