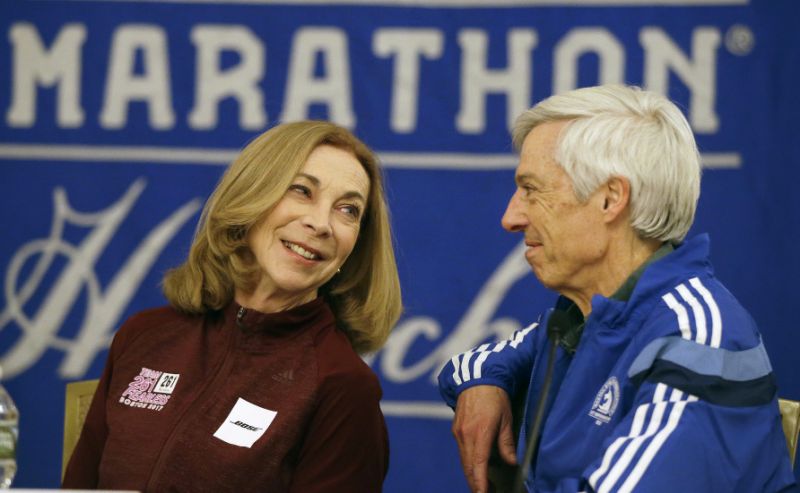 BOSTON (AP) -- One is a neuroscientist-turned-sculptor, the other an activist and organizer. Taking different paths to the same goal, Bobbi Gibb and Kathrine Switzer outran Boston Marathon tradition and trampled the notion that women were too frail for a 26.2-mile race.

"When you're trying to overcome a prejudice and do something you're not allowed to do, how do you do it?" Gibb said this week as she prepared to serve as grand marshal for the 121st edition of the race, which Switzer will run again on the 50th anniversary of her landmark entry.

"I was hacking through the jungle. There was no path at all," said Gibb, who actually hid in the bushes before becoming the first woman to run Boston, a year before Switzer strutted up to the starting line as the first official female entrant. "But I think we need all kinds of people. She's an extrovert, I'm an introvert. Everybody has a gift to give."

The Boston Marathon traces its origin to an ancient Greek battle and has a rich history of its own, filled with war heroes and Medford milkmen who persevered through oppressive heat, blinding rain and the occasional fox terrier that strayed onto the course.

But the story of the race's distaff division didn't begin until 1966, when it was still a fringe footrace of amateurs running only for an olive wreath and a bowl of beef stew.

Told she was too pretty for medical school — "the boys in the lab," and all that — Gibb trained for the race in solitude while on a cross-country road trip in her Volkswagen Microbus , then persuaded her mother to drive her to the starting line by saying: "This is going to help set women free." Jumping out of the forsythia bushes after the gun, she joined a field of 415 men and began what has only recently been recognized as the "unofficial era of women's participation."

A year later, Switzer told her coach at Syracuse, Arnie Briggs, about Gibb and said she also wanted to run Boston.