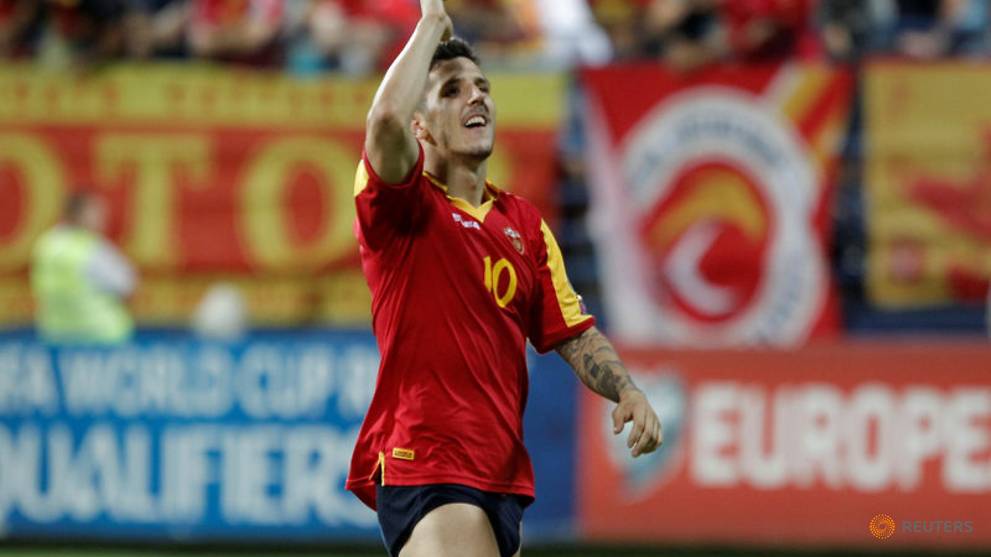 Montenegro stayed in contention for a World Cup qualifying play-off berth after Stevan Jovetic scored a magnificent hat-trick to help the tiny Adriatic nation to a 4-1 rout of Armenia in a pulsating Group E clash on Saturday.

PODGORICA: Montenegro stayed in contention for a World Cup qualifying play-off berth after Stevan Jovetic scored a magnificent hat-trick to help the tiny Adriatic nation to a 4-1 rout of Armenia in a pulsating Group E clash on Saturday.

Mesmerising his markers with dazzling ball control, the Sevilla striker rifled in a pair of thumping shots after Fatos Beqiraj had sent the Montenegrins on their way with an equally impressive second-minute opener.

Jovetic put the icing on the cake with an acrobatic overhead volley, keeping alive his nation's hopes of reaching their first major tournament as an independent nation.

The result left Montenegro, a former Yugoslav republic with a population of just over half a million, second in the group on 10 points from six games, six behind runaway leaders Poland and ahead of third-placed Denmark on goal difference.

Europe's nine group winners will qualify automatically for next year's 32-team tournament in Russia while the eight best runners-up will enter a two-leg playoff for the continent's remaining four berths.

Fans in the Podgorica stadium had barely taken their seats when Beqiraj stole in at the near post and tucked the ball into the far corner with the outside of his foot after a low cross by left back Vladimir Jovovic.

The home team's keeper Danijel Petkovic denied Marcos Pizzeli before Jovetic doubled Montenegro's lead with a thumping low shot from 20 metres after sending his marker tumbling down with an exquisite turn at full speed.

Linking up superbly with Jovetic in the last third of the pitch, Beqiraj nearly added another goal on the stroke of halftime but his ferocious effort cannoned off the post.

Delighted home fans did not have to wait long for more joy after the interval as the unstoppable Jovetic sent them into raptures with another goal of the highest quality.

He raced away from three defenders before teeing himself up on the edge of the penalty area to curl a rasping shot into the top left corner, beyond Armenia's helpless goalkeeper Arsen Beglaryan who was left clutching thin air.

Jovetic's final act of brilliance eclipsed the opening two as he turned and twisted to meet an inviting Beqiraj cross with a spectacular finish which drew a standing ovation from the passionate home crowd.

Striker Ruslan Koryan netted a late consolation goal for the visitors, whose standout player Henrikh Mkhitaryan was subdued in a deeper role throughout the contest.

(Writing by Zoran Milosavljevic in Belgrade; Editing by Clare Fallon)