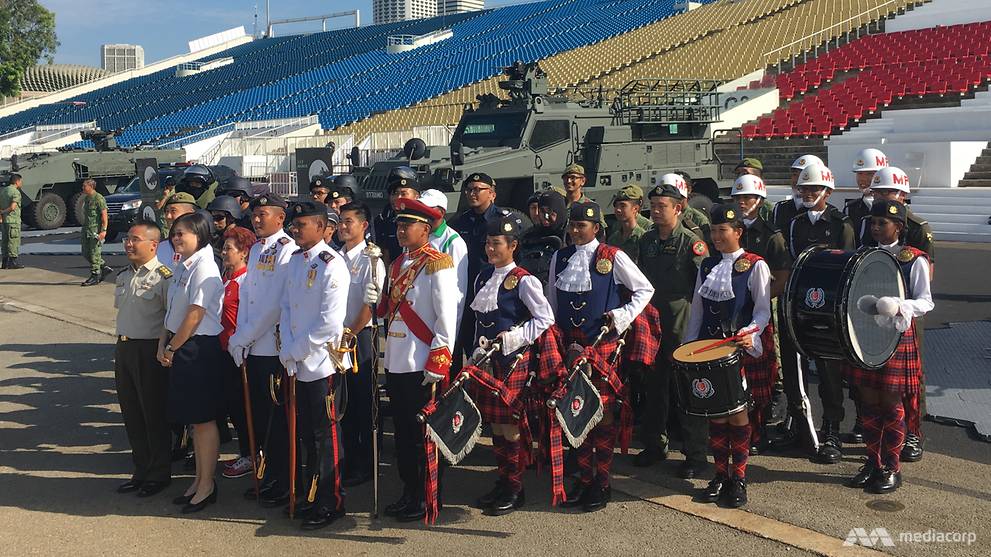 What to look out for at National Day Parade 2017

SINGAPORE: This year's National Day Parade (NDP), which will be held at the Marina Bay Floating Platform, will pay special tribute to national servicemen as Singapore celebrates 50 years of National Service.

At a media showcase on Tuesday (Jun 13), organisers said the parade will feature the largest military tattoo performance in NDP history. The Dynamic Defence Display (D3) segment - a crowd favourite - will also make a return after a two-year hiatus.

The NS50 tribute will include a Salute from the Nation segment, where about 2,000 participants from 31 marching contingents will salute national servicemen, their families and employers. Members of the public will be invited to join in.

"Besides recognising NSMen, we also recognise the families. We know that when NSMen have to come to camp to report for duty, it is really the families helming the home front so they will also be asked to stand up and the parade will perform a salute to them," said Colonel Koh Ee Wen, chairman of the NDP 2017 Parade and Ceremony Committee.

Pioneer batches of NSmen and their sons have also been invited to watch the parade.

And to commemorate 50 years of National Service, the parade commander is an NSman, Lieutenant Colonel (LTC) Lim Wee Tee. The full-time sales director of IT company DataSpark and father of two said while he was honoured to be offered the role about a year ago, he was initially concerned about how he could juggle family, work and NDP commitments. However his wife urged him to take up the opportunity and support from the NDP team helped allay some of his fears, LTC Lim said.

“I hadn’t picked up a sword nor put on a uniform like this for 21 years. I was very rusty, very out of touch but nonetheless I have a fantastic group of trainers who have been training me very hard over the past year in terms of drills and diction for the (Malay) commands,” said LTC Lim who has spent every Saturdays training for the parade since May.

Col Koh said LTC Lim was appointed due to his significant contributions to NS, and his ability to lead and motivate those under his charge. LTC Lim is currently Commanding Officer of the 821st Battalion where he oversees some 500 soldiers during reservice. He will assume the appointment of the Second-in-Command for the 22nd Battalion, Singapore Infantry Brigade in July this year.

The military tattoo performance will feature bagpipers from the Singapore Police Force (SPF) Women Police Pipes and Drums for the first time. Together with the combined band and the Silent Precision Drill Squad, the 170 performers will form six images, such as an outline of the Singapore map and the Merlion.

Spectators can also look forward to five F-15SG fighter aircrafts performing the signature bomb burst, as well as other traditional celebratory elements such as the 21-Gun presidential salute on the M3G military raft and the state flag flypast flown by an RSAF Chinook helicopter escorted by two AH-64D Apache helicopters.

The D3 segment, which features air, land and sea military capabilities, will make use of extensive use of pyrotechnics. The segment will be split into two parts before and after the parade and ceremony: One to showcase military hardware and the other to focus on threats to cybersecurity and counter-terrorism.

"This year's D3 has two objectives - we want to assure all Singaporeans that our security agencies remain ready to deal with any security threats - whether present or new (and) emerging security threats. Second, we want to remind all Singaporeans that everybody plays a role in ensuring the safety and security of our nation, in line with our theme, #OneNationTogether as well as the message the Government has been sending as part of SGSecure," said Colonel Tan Tiong Keat, chairman of the NDP2017 show and D3 Committees.

"We need all Singaporeans to be vigilant in letting us know if there are any dangers so we can comprehensively and responsively deal with these security threats," he added.

He noted that safety measures will be put in place before the second segment. For example, messages will be flashed on screen to let the audience know to expect loud noises and pyrotechnics. Crowd motivators within the seating gallery will also warn the audience ahead of time if their particular area will be part of the display.

In total, more than 50 assets will be showcased in the the D3 segment, the largest since it was held for the first time in 2007. New capabilities featured include the SAF Belrex Protected Combat Support Vehicle which is used by the army to provide close support for infantry forces on a battlefield, and the Rapid Response Fire Vessel used by the SCDF to provide fire-fighting and rescue services within Singapore waters.