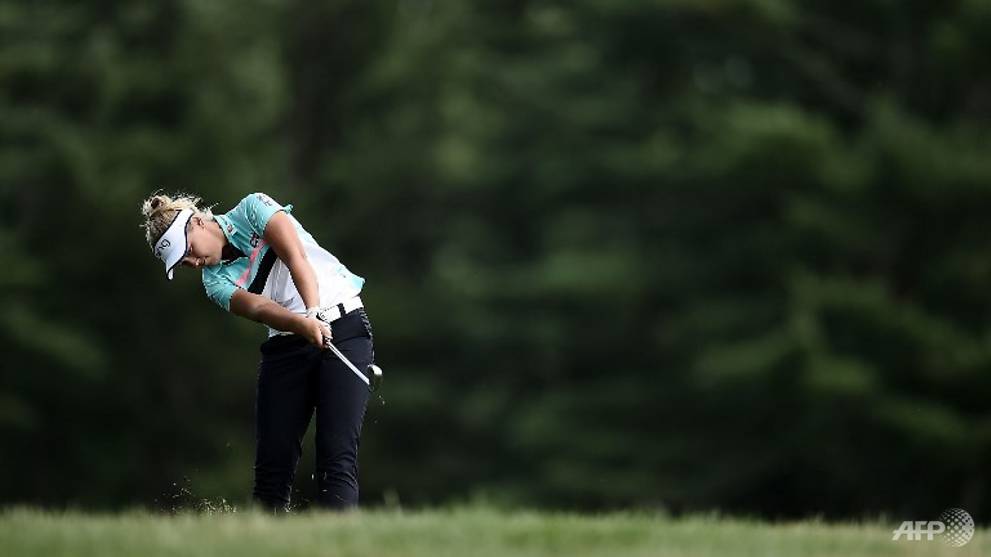 Brooke Henderson of Canada hits her second shot on the 17th hole during the final round of the Meijer LPGA Classic at Blythefield Country Club on Jun 18, 2017 in Grand Rapids, Michigan. (Photo: Stacy Revere/Getty Images/AFP)

REUTERS: Canadian Brooke Henderson tamed strong winds to break out of a logjam and surge to a two-stroke victory at the Meijer LPGA Classic in Grand Rapids, Michigan on Sunday.

Henderson displayed a mix of power and precision to card a bogey-free final round of three-under 66 on the Blythfield Country Club course, which played to a par of 69 over the weekend due to flooding on the third hole.

“I played really steady golf. It’s cool to be able to make those putts under pressure,” Henderson told Golf channel after sinking a three-foot par putt at the last to finish at 17-under 263.

American Lexi Thompson for the second consecutive week was unable to convert a 54-hole lead into victory. She carded 69 to tie for second with compatriot Michelle Wie (65) at 15-under.

Eight players were tied for the lead at one stage of the final round but Henderson broke clear with three birdies in five holes around the turn.

“I was surprised when I looked at the leaderboard and had a two-shot lead on the 18th green but I’m super happy,” Henderson said.

She is the 15th different winner on the LPGA Tour in 15 tournaments this season, the longest streak without a repeat champion since 1991.

Henderson, now 19, burst onto the LPGA scene by winning the Portland Classic by eight strokes in 2015, becoming the third player to triumph before turning 18 after Thompson and Lydia Ko.

Sunday also marked the continued improvement of former child prodigy Wie, whose runner-up finish came after a tie for third in her previous start.