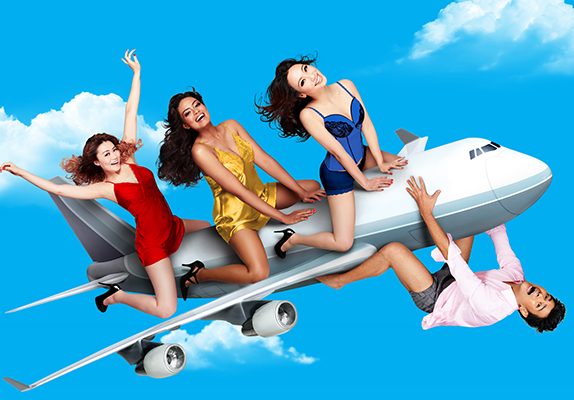 Boeing Boeing soars back onto the stage this July

Fasten your seat belts for some hilariously turbulent times ahead

Back for the fourth time, it seems like there is no stopping the immense success of French farce Boeing Boeing, which will be re-staged here from 23 Jun to 24 Jul.

Despite premiering in 1960, the play retains its flighty and flirtatious nature over the years to become the most performed French play in the world.

First staged in Singapore in 2002 at Raffles Hotel’s Jubiliee Hall, the play was re-staged twice in 2005 and in 2010 — all played to sold-out houses.

W!ld Rice will be presenting Beverley Cross’ English adaptation of the mile-high adventure that will leave you clinging to your seats in hysterical laughter.

Follow Bernard as he carefully plans his schedule so that his three air stewardess lovers are blissfully unaware of each other’s existence.

Throw in Bernard’s forgetful friend who simply cannot keep up with his Casanova friend’s game and it seems like Bernard has to hit the brakes fast before he crash lands into trouble.

The high-flying play will be directed by Pam Oei, who was part of the cast in the 2002 and 2005 productions.

This time, she has been promoted from stewardess to captain, and is looking forward to working with a brand new cast and creative team to bring the play back to life.

The cast includes Oon Shu An, Judee Tan, Shane Mardjuki, and Rodney Oliviero, while the creative team will be led by Eucien Chia, Tony Trickett and Frederick Lee.

Boeing Boeing will run in Victoria Theatre from 23 Jun to 24 Jul, tickets available online from $40