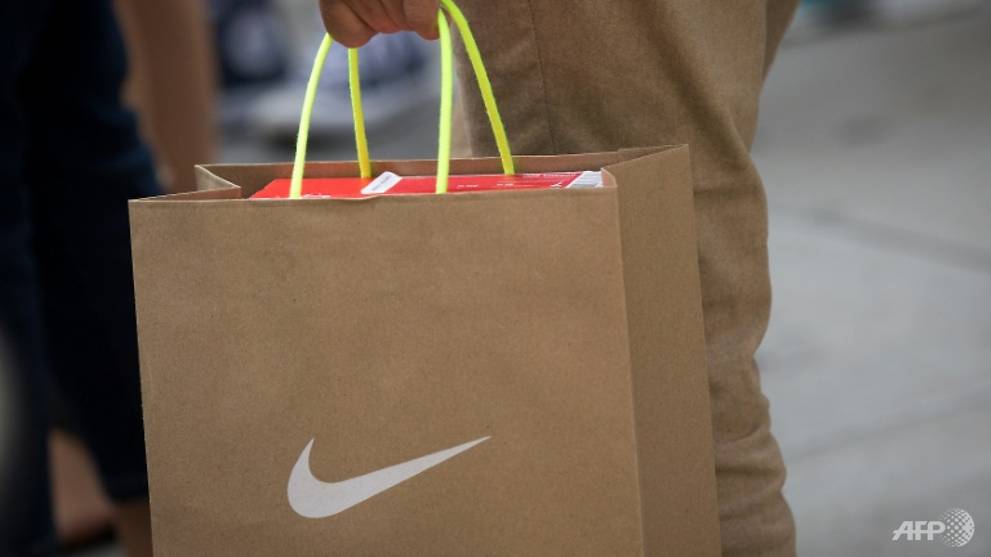 Nike to sell limited number of items on Amazon

Shares of Nike surged in after-hours trading as it reported better-than-expected fourth quarter earnings and gave a solid outlook for 2018 earnings and sales. (Photo: AFP/Drew Angerer)

NEW YORK: Nike reached an agreement to sell a limited number of items directly on Amazon, executives said on Thursday (Jun 29), in a sign of the growing importance of the e-commerce platform.

Nike executives described the venture as a "pilot" project to sell some shoes, apparel and accessories, confirming earlier press reports about a deal.

Shares of Nike surged in after-hours trading as it reported better-than-expected fourth quarter earnings and gave a solid outlook for 2018 earnings and sales.

Nike executives emphasised that the Amazon venture was just one part of a strategy that also includes more direct-selling presence through Nike's own website and mobile application.

"It is really a small pilot," Nike brand president Trevor Edwards said of Amazon on a conference call with analysts. "It's just the start. As we continue to work with them and we see success, we will see how we can scale it."

Nike earlier this month unveiled a new global sales structure targeting growth in the biggest cities and speeding the development time on new fashions and products in response to consumer demand.

The shakeout in retail due to e-commerce and shifting consumer behavior has led to the demise of some sports chains like Sports Authority and heavily pressured department store chains, such as J C Penney and Macy's.

Much of Nike's products already appear on Amazon courtesy of third-party sellers. Analysts have seen a move to direct selling on the platform as a way to better market Nike goods on Amazon and protect profit margins.

Chief executive Mark Parker described the Amazon venture as "an opportunity to elevate the way the Nike brand is displayed."

Investment bank Canaccord Genuity said Nike was most likely to sell on Amazon "mid-tier" products and would not risk its relationships premium distribution channels such as the Foot Locker chain.

"We have and continue to give Nike credit for being the best in retail at segmenting," Canaccord Genuity said in a note last week. To that end, we suspect that it will work hard to keep the lines between its tiers of distribution distinctly drawn."

Goldman Sachs described gaining control of presentation on Amazon as an "operational imperative" for Nike to better manage goods and protect higher-margin items that could otherwise be affected by outside platforms.

Nike executives side-stepped questions on details about the products going on Amazon, including whether it would include the popular Michael Jordan sneakers, or whether the goods would be "mid-tier" or "premium."

The announcement came as Nike reported fourth-quarter net income of US$1.0 billion, up 19 percent from the period a year ago.