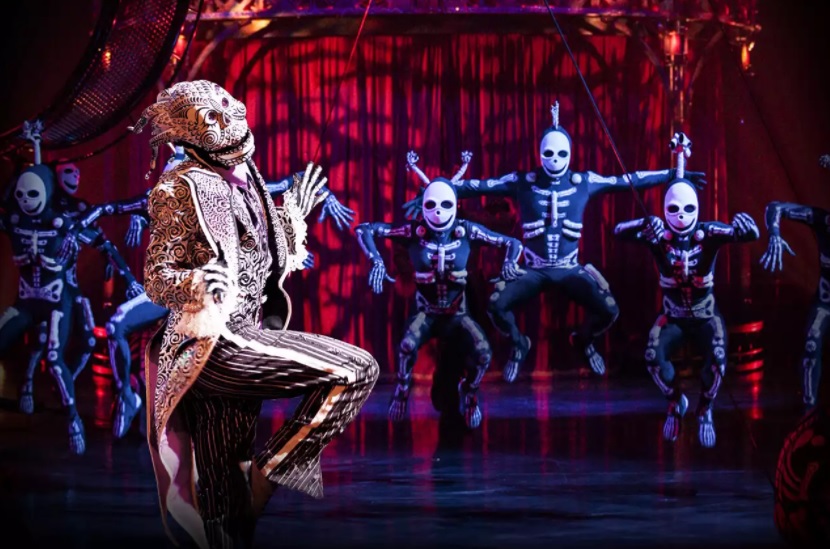 The largest theatrical producer in the world, Cirque du Soleil returns to Singapore this week, presenting KOOZA at Marina Bay. The Canadian entertainment company is famous for their combination of thrilling acrobatic performance with the art of clowning, bringing forth a modern circus entertainment experience for the whole family. DBS Bank is an official sponsor for the event.

Presented in the intimate setting of blue and yellow Big Tops, Kooza has been seen by over 7 million people around the world and is inspired by the Sanskrit word “Koza” which means “box”, “chest” or “treasure”. Kooza showcases an international cast of 50 acrobats, musicians, singers and actors from 19 different countries, performing physically astonishing feats and laugh-out-loud antics to a live soundtrack fusion of jazz, funk and Bollywood beats.

The performances are weaved together through a narrative that follows “The Innocent” who presents the child within us all, as he takes a journey of self-discovery through a kingdom of eccentric characters, electrifying thrills and out-of-the-box surprises. Presented in a colourful medley of costumes and characters, Kooza springs open like a bejeweled toy box to capture the audience’s imagination and set pulses racing.

There’s never a dull moment from start till end and here are five reasons you should head down and catch the show while it’s showing at Marina Bay in Singapore.

A big top circus featuring animal performances and freak shows are things of the pass now, thanks to better understanding on animal cruelty and the humiliation faced by the human ‘freaks’ who are usually people born with birth defects or other forms of deformity.

Acrobatic performances are still being enjoyed though, as inspirations to what the human mind and body can achieve when it’s trained to perfection. The Cirque du Soleil brings you a wholesome big top circus entertainment which make circus still relevant in this modern world.

The acrobatic performances put forward in Kooza are curated from among the world’s bests.Without giving away too much of the show, highlights include a pair of daredevils running in a giant suspended twin-pendulum; a trio of contortionists who will shock you as they merge their bodies together effortlessly like water; tight-rope walkers on bicycles and many more:

#kooza by @cirquedusoleil is now showing Marina Bay! Tonight is the opening night and I am feel so grateful to be able to catch the performance last night, thanks to @dbsbank , an official sponsor of the show. Amazing acrobatic displays, stunning costu...

I hear the audience gasping so many times and heaving huge sigh of relieves when they witness the acrobats successful complete their most thrilling stunts.

Laugh till you drop

I am sure all of us have come across bad comedians and clowns. Although the really good clowns make it all seem so effortless to get the audience laughing and falling off their seats, comic timing is something which requires years of experience and training. The clowning crew at Kooza are the bests of the bests and are able to keep the mood of the audience high and happy right from the beginning till the end.

If you bought tickets for the first few rows, be prepared that you might get called on stage for some fun audience participation.

and if you have already seen one previously, you would understand why you would need to catch it again. My first Cirque du Soleil experience was watching Totem in 2015, also at Marina Bay in Singapore. I got hooked after that and told myself I have to see it again if they are performing here again.

I have seen many other acrobatic performances from my travels to different parts of the world and onboard cruise ships. Sometimes, the skills of standalone acrobats are comparable or even better than the performers at Cirque du Soleil, but the whole is greater than the sum of the parts. What’s so enjoyable about any Cirque du Soleil show is the choreography and the narrative that weaves all the performances together. There’s never a dull moment and each act is played out to milk the most thrill, suspense or laughter.

There’s a reason why they have a live band and singer for the acoustic instead of using pre-recorded sound effects – so that the music can match to the performances with perfect tempo. The attention to details is astonishing.

Cirque du Soleil’s Kooza will be showing in Singapore from now till 20 August. More details on the ticket purchases are available via SISTIC online.