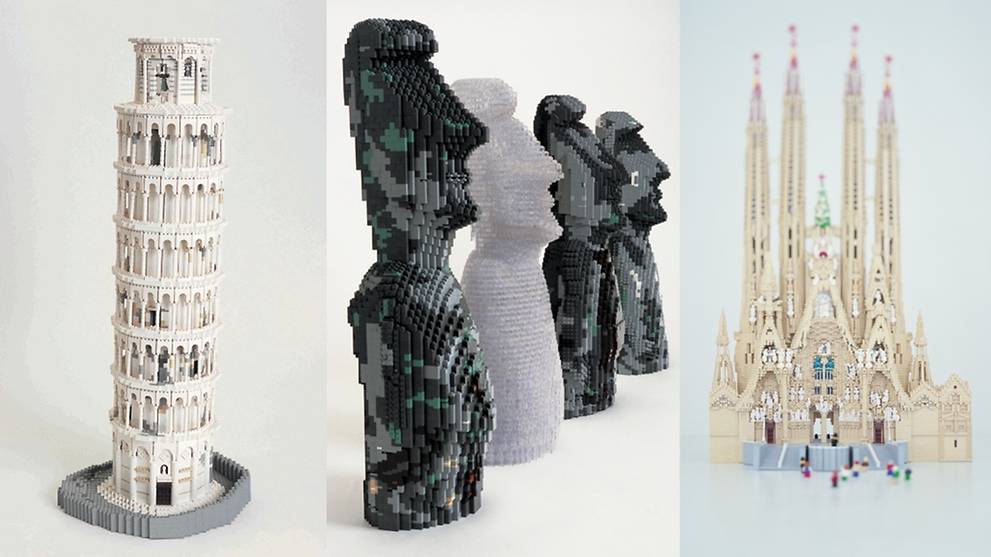 The Singapore Botanic Gardens is one of 9 Southeast Asian sites painstakingly recreated for the show. Other regional heritage monuments include Indonesia’s Borobodur and Cambodia’s Angkor Wat.

The touring Piece Of Peace exhibition features Lego models of World Heritage Sites such as the Leaning Tower of Pisa, the statues of Easter Island, and the Sagrada Familia Basilica in Barcelona. (Photo: Piece Of Peace, Lego Group)

SINGAPORE: What do the Singapore Botanic Gardens, the Leaning Tower of Pisa, and Mount Fuji have in common? They’re all UNESCO World Heritage Sites – that you can now ‘visit’ all at one go in a special Lego exhibition at Fort Canning Arts Centre.

The show, titled Piece Of Peace, comprises 44 reconstructed heritage sites from around the world. These include some iconic structures such as Australia’s Sydney Opera House, China’s Great Wall, and India’s Taj Mahal.

To celebrate the 50th anniversary of the Association Of Southeast Asian Nations (ASEAN), the exhibit also includes heritage sites from nine countries in the region, such as Indonesia’s Borobodur temple and Cambodia’s Angkor Wat.

Aside from the main showcase, Piece Of Peace also includes interactive segments, such as the Brick By Brick SG area, where visitors can create their own structures that will be incorporated into a map of Singapore.

The travelling show was opened on Thursday (Jul 27), with Minister for Culture, Community and Youth Grace Fu as the guest-of-honour. It runs in Singapore until Sept 3.

Try to shine a light inside the Itsukushima Shinto Shrine in Hiroshima and you'll find out how detailed it actually is. (Photo: Piece Of Peace, Lego Group)

Since it was launched in Japan in 2003, Piece Of Piece has attracted 2.9 million visitors.

“The aim of the exhibition is to spread the message of peace around the world. And to let our children know and our future generation know that these are treasures of the earth built by our forefathers and is something that we have to treasure,” said Chua Buck Cheng, events director of Axseed Events, which organised the show.

“Even within Singapore, we’re having this national conversation of what to preserve, our culture, our heritage. So we feel that this is a very meaningful time to bring this exhibition to Singapore.”

Count `em all: This model of Indonesia's Borobudur temple includes all 72 stupas found in the original. (Photo: Mayo Martin)

The heritage sites, which represent 34 countries, comprise both man-made and natural ones. While many are represented by iconic monuments, there are those that showcase flora and fauna found on these sites.

The models are also intricately made. The old city of Vigan in the Philippines, for example, comprises 56,000 bricks, while Denmark’s Roskilde Cathedral took approximately 648 hours to make.

Said Chua: “The details of some of the builds are absolutely amazing, like the historic town of Sukhothai, which features a herd of elephants surrounding the build. Each of them has actually movable trunks and the trunks have to be positioned in the right order at the right angle.”

The Spanish colonial town of Vigan in the Philippines is the most intricate model in the exhibition, comprising 56,000 Lego bricks. (Photo: Mayo Martin)

Seven of the nine ASEAN sites are first-time commissions, which have been built by homegrown Lego builders.

Among them is Wong Jun Heng, one of two builders tasked with recreating Singapore Botanic Gardens. The 158-year-old tropical garden is one of only three gardens to be recognised as a World Heritage Site in 2015.

Building the model took around 14 days, and included going on a site recce and creating a digital model using a computer programme.

Since the Botanic Gardens was chosen as a heritage site because of the plants, Wong and his collaborate made sure they highlighted this aspect.

The Piece Of Peace exhibition also includes an interactive section where visitors can create their own Singapore building to add to the city skyline. (Photo: Mayo Martin)

“The grandstand, or the gazebo, was actually one of the main structures they wanted to include, but we made sure we actually had the yellow raintrees as well as some of the tembusu trees,” said Wong, who added it was a challenge to create these.

“As you know, Lego bricks are all about right angles, so the challenge was how to create a nice curve out of those Lego elements. We used a technique called stitching, where we attached the plants together to create a rounded, organic-looking canopy,” he said, adding that around 6,000 to 8,000 flowers were used.

“It’s Singapore’s only Heritage Site, and to see it amongst all these monuments makes me proud,” said Wong.