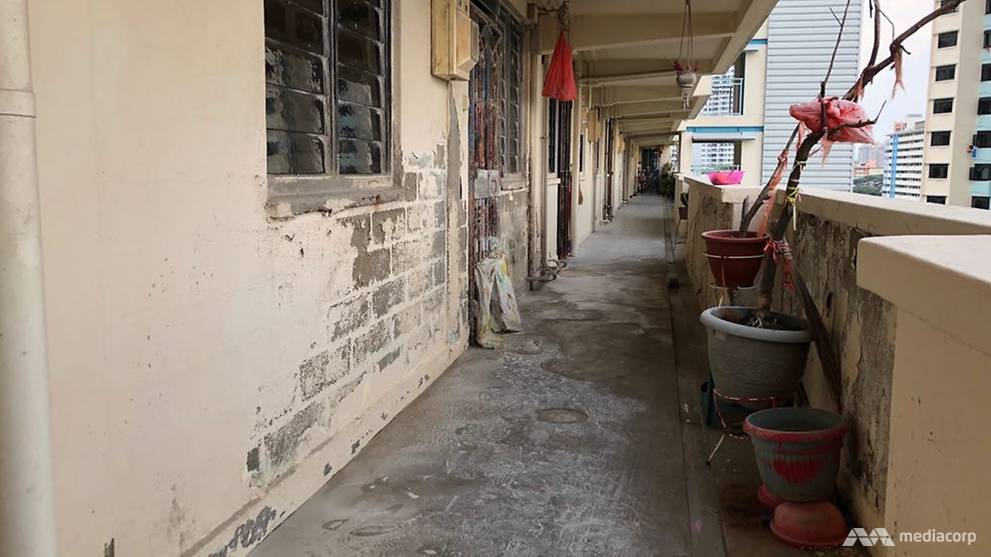 Another view of the battered-looking corridor. (Photo: Fann Sim)

SINGAPORE: Various agencies are aware of the "irregular behaviour" of the resident in Block 55, Toa Payoh Lorong 5 and are working together to "help resolve the matter", said the Bishan-Toa Payoh Town Council on Sunday (Jan 7).

Pictures of the damage the resident, a woman in her 60s, supposedly brought upon a common corridor were circulating on social media during the week.

When Channel NewsAsia visited the block, paint was peeling off the walls, exposing brick and cement. The ground was also damaged and uneven. One resident, Mdm Lau Yoong Kin, said her neighbour had been throwing salt and ash on her front door and window. She also complained of the woman's constant shouting.

In a statement, the town council said the agencies involved include the Housing and Development Board, resident committees, voluntary welfare organisation Care Corner and the neighbourhood police centre.

Grassroots leaders had visited the flat previously, the town council said, and found that the resident, who lives in a unit with her husband, was using salt, vinegar and baking powder to scrub the wall and floor to supposedly "get rid of spirits". She would also throw cold ash over the parapet.

The town council said the "most important goal of ongoing concerted efforts" has been to "assist the couple, especially (in obtaining) professional help for the wife".

"However, she has adamantly refused offers of help in this regard, despite repeated attempts," it said. "The police are monitoring if there are adequate grounds to compel her to seek professional help, but their current assessment is that she poses no danger to herself or residents."

Repair works had previously been conducted, but despite being issued warnings, the resident persisted in her actions, the town council said.

It noted that the couple have lived in the block for about 10 years and that relocation "would not solve the primary problem".

"It would be unfair to the husband to simply transfer the problem to another precinct and (doing so) may exacerbate the wife’s condition," the statement added.

"Nevertheless, alternate housing arrangements are being planned if the resident’s behaviour cannot be improved despite treatment."

The town council assured residents that the authorities have taken their safety into account in dealing with this issue. It also expressed hope that the various parties working on the matter "can bring this problem to a satisfactory outcome".

Under the Mental Health ACT..The authority can impose mandAtory treatment for the resident. No need to give empty reassurances.