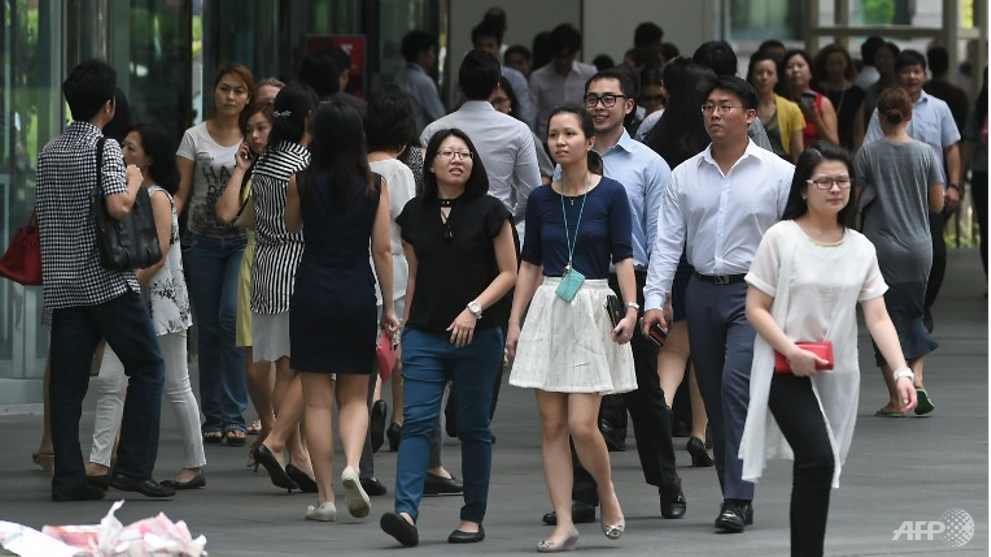 Commentary: The Government needs to do more to bridge the class divide, but so do we

With class divisions in Singapore now far more pronounced, more steps need to be taken to expose our children to those whose realities are different from ours, says Channel NewsAsia’s Bharati Jagdish.

People walk out for their lunch break at the Raffles Place financial district in Singapore. (File photo: AFP/Roslan Rahman)

If you come from an elite school, it’s likely most of your friends, even in adulthood, come from one of those schools too.

If you live in a private estate, you’re not likely to have friends who live in the heartlands, according to a recent Institute of Policy Studies' (IPS) survey.

The findings of the Study On Social Capital In Singapore have come as no surprise to many Singaporeans. After all, isn’t it instinctive to make friends with the people you are most exposed to or have the most similarities with, even if those similarities are largely based on what some might say are superficial factors such as education and lifestyle?

Such class divisions are now far more pronounced than societal splits based on race or religion.

IPS' Deputy Director for Research Dr Gillian Koh said there is a need to prevent the issue from becoming a political flashpoint adding that the social class divide could lead to a “winners versus losers” situation affecting political stability.

Most of us would agree with this and there’s evidence of this in several countries across the world.

The possible solutions are varied.

The researchers mentioned programmes such as the Outward Bound Singapore camp for students that encourage mixing with those outside of one’s usual social circle.

The new five-day adventure-based, multi-school camp for all Secondary 3 students is slated to kick off in 2020, and it aims to bring teenagers of different institutions together.

However, how much difference would five days really make?

The Ministry of Culture, Community and Youth says it already has several initiatives to promote social mixing.

These include arts, heritage activities and sports initiatives in the community.

While such initiatives might work to some extent, some experts feel the exposure needs to be more sustained and it needs to start with our children and who they are exposed to in school on a daily basis.

OBS trainees manning the ropes at one of its obstacle courses. (Photo: Noor Farhan)

The source of the divide needs to be addressed.

Much of it has to do with excessive emphasis on academic achievements and material wealth.

Our wide income gap exacerbates the scale of the problem and the flaws in our meritocracy have not gone unnoticed.

While anyone regardless of their backgrounds who works hard and does well should be able to go as far as they want to, we are all alarmingly aware of how wealth gives some of us an edge over others, even when it comes to school admissions.

The ability of the wealthy to afford tuition and enrichment classes gives their children an unfair advantage that has been lamented for years.

Several years ago, it was announced that all primary schools would have to set aside at least 40 places for children with no family ties to the school, such as a sibling or parent who is an alumnus.

In order to ensure that top schools don’t stay “closed circles”, Prime Minister Lee Hsien Loong also announced that top secondary schools would have to take in more students from different backgrounds through the Direct School Admissions scheme. The criteria is also broadened to admit good students with other "special qualities" such as resilience, drive, character and leadership.

Many, however, see these efforts as piecemeal.

Is it possible to be more egalitarian when it comes to admissions and encourage schools in which students of diverse socio-economic backgrounds and academic abilities learn together, hence grow as individuals by learning about each other’s’ lives and challenges?

For this all schools will also need to be equally well-resourced so as not to create a perception of advantage or otherwise.

What criteria would school admissions be based on then?

If we went by proximity to one’s home, the purpose would be defeated as top schools tend to be in wealthier neighbourhoods.

Some have gone as far as to suggest such schools be moved.

Perhaps this is what we need – a more deliberate effort to ensure diversity in schools.

Sociologists have also pointed out that if elite students only mix among themselves, it leads to network-building that propagates advantages even in working life.

Member of Parliament Denise Phua said in a 2016 edition of On the Record: “If we carry on the way we have been all these years, we create a so-called elite class, we create a group of leaders who do not have opportunities to mix with people of different abilities, different social backgrounds. Is this good for our country?”

The narrative from the Government is also key.

Government redistribution efforts have been boosted over the years but many would say they can always go further.

Emeritus Senior Minister Goh Chok Tong once proposed a “compassionate meritocracy”, encouraging those who have excelled in the system to contribute back to society.

Deputy Prime Minister Tharman Shanmugaratnam extolled the virtues of a “meritocracy through life” where “you are assessed on your performance at every stage of your life, regardless of where you came from or where you started.”

More can be done in the civil service to show it is doing this in its own hiring practices.

More is already being done to create multiple pathways of success for students.

PUTTING IT INTO PRACTICE

We, as citizens, must also recognise there is much we can do in our own lives.

People naturally gravitate towards those they share similarities with.

If we looked at the issue more deeply, we would see that similarities extend beyond academic qualifications and housing type.

We are each complex beings and knowing people who are different from us could in fact make us richer. It could help us learn from one another and through helping someone else we could develop and discover strengths we didn’t know we had, and even strengths we didn't think they had.

It would certainly make us more empathetic human beings.

Koh Seng Choon, founder of social enterprise, Project Dignity, said in a recent On the Record interview: “We are a society driven by the achievement to be number one in everything, but we must remember those who can’t be number one. If you don’t see such people, you will lose empathy.”

At 50, Koh who had spent many years working overseas came back to Singapore, and realised it had changed.

“In other countries, I saw poverty, homeless and disabled people. It was all in the open. When I returned to Singapore, I could not see any of these people, but I knew they were there.”

So he sought them out and today, he trains and employs a mixture of people with disabilities, former inmates, single mothers, battered wives, school dropouts and essentially anyone struggling with societal acceptance to cook and run hawker stalls. He also places such individuals in other establishments looking for workers. He believes in recognising strengths in every individual and empowering them.

Koh Seng Choon, founder of the Dignity Project with one of his trainees. (Photo: Facebook / Dignity Kitchen)

Koh himself came from a humble background, so for him to realise this even after he had achieved academic and financial success was perhaps not a stretch.

But what about those who are born into privileged families?

Yes, it would help if the education system were designed in a way that encouraged diversity and mixing across class divides from the time our children entered the school system.

But we also have a part to play in recognising the benefits of reaching across the divide ourselves.

It is in everyone’s interest to prevent this, whichever social class you belong to.

Being exposed to different ways of thinking and living could make each of us richer in other ways – propel us to be more embracing of new ideas or even become more innovative in terms of solving some of the social problems our nation faces.

This is exactly what an enterprising and externally-oriented Singapore needs.

If we see the merits, we must take steps in our lives to also expose our children to those whose realities are different from ours.

This could be through volunteering or participating in social causes or activities.

We could also make our voices heard more strongly to effect change when it comes to issues such as school admissions and hiring practices that perpetuate the class divide.

It might take deliberate effort at first, but clearly, society would be the better for it.