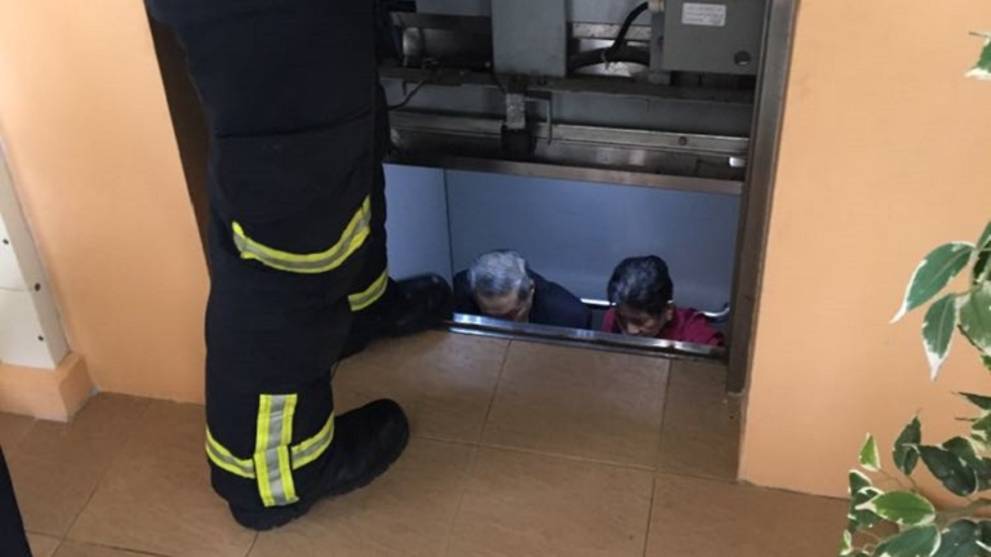 The elderly couple is seen sitting in the lift as SCDF officers attempt to rescue them. (Photo: Veronica Yong)

SINGAPORE: An elderly couple was trapped for more than two hours in a lift at an HDB block in Yishun on New Years' Day and had to be pulled out through a small gap.

Mrs Amy Yong, 79, and her husband Mr Mike Yong, 81, were making their way home from church at about 10am when the lift malfunctioned.

The couple live on the second floor of Blk 637A Yishun Street 61. There is only one lift servicing the four-storey block.

"They had stopped by the market just after church," the couple's son, Mr Stephen Yong, 58, told Channel NewsAsia. "They came back, hit the (button for the) second floor, the doors shut and jammed.

"The lift moved for a second then it stopped," he said, adding that the lift was stuck between the first and second floors.

Mr Stephen said that responders from Nee Soon Town Council arrived within 12 minutes after his parents rang the emergency button.

His parents, who did not have their mobile phones on them, had used the responders' phone to call Mr Stephen.

SCDF officers attempting to rescue the elderly couple trapped in the lift at an HDB block in Yishun. (Photo: Veronica Yong)

The town council responders managed to open the doors of the lift, but could not get it to work and so contacted Sigma, the lift maintenance company, Mr Stephen said.

But when Sigma arrived, Mr Stephen said, they too could not get the lift to restart "because of a problem with spare parts".

By this time, his parents - who have high blood pressure - had been trapped for more than one hour and were beginning to get giddy. Mr Mike too was "already panicking and very pale", said his son.

The elderly couple, who have high blood pressure, is seen waiting to be rescued after being trapped for more than two hours. (Photo: Veronica Yong)

"They (Sigma) wanted to go to another building to get the spare parts. I stopped them because we didn’t know how long it would take. It could take another hour or so," Mr Stephen said.

At this point, the couple's daughter, Ms Veronica Yong, 55, who was also at the scene decided to call the Singapore Civil Defence Force (SCDF), who arrived within 10 minutes.

SCDF said it was alerted to the incident at about 11.50am.

"Upon SCDF's arrival, the couple was safely removed from the lift by lift technicians. No injuries were reported," SCDF said.

The elderly woman was who trapped in the lift being helped by a resident and SCDF officers. (Photo: Veronica Yong)

Mr Stephen said that SCDF officers assessed his parents at the scene and found that they had elevated blood pressure. His parents declined to be taken to the hospital for further checks, Mr Stephen said.

"I want to raise the issue of poor lift conditions and the good work of the SCDF," said Ms Veronica. "I heard my neighbour saying recently that it (the lift) had malfunctioned."

Her brother, Mr Stephen, added: "There are a lot of elderly staying here. If the maintenance of the elevator is not working, it's very bad for them."