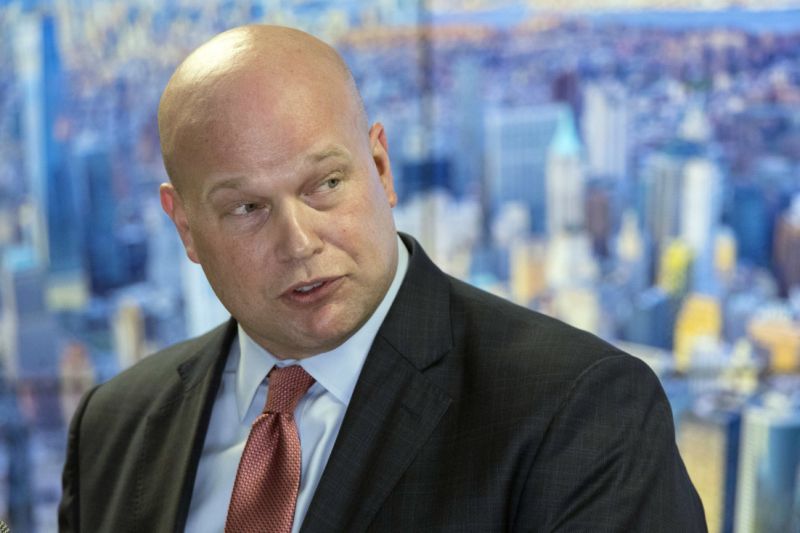 Muslim, Christian, Jewish, Unitarian Universalist and secular groups joined together on Thursday to call for Whitaker to step down from his post. Their displeasure stems from comments he made four years ago that appear to suggest he would only support federal judges who are Christian.

The leaders condemned the suggestion that a nominee should be subjected to a “litmus test of faith” to enter public service.

“By this standard, no atheist, Jew, Sikh, Muslim or member of any faith group other than Whitaker’s own is qualified to rule in American courts. That statement sounds absurd ― and it is,” the groups said in a joint letter organized by Muslim Advocates, a legal advocacy organization.

Whitaker, a 49-year-old former prosecutor, had been chief of staff to Attorney General Jeff Sessions, whom Trump forced to resign on Nov. 7. Democrats were furious that Whitaker, a Trump loyalist who has been critical of special counsel Robert Mueller’s Russia investigation, was elevated to acting attorney general without being confirmed by the Senate.

In 2014, Whitaker appeared on a panel of candidates for the Republican Senate nomination in Iowa, a race that he lost. Conservative blogger Erick Erickson asked the candidates what they would do to try to block the confirmation of President Barack Obama’s nominees for federal judgeships.

Acting Attorney General Matthew Whitaker was promoted from chief of staff to take the place of Jeff Sessions, who was forced to resign. (Mary Altaffer/ASSOCIATED PRESS)

Whitaker said that in evaluating nominees, he’d want to know: “Are they people of faith? Do they have a biblical view of justice? Which I think is very important.” He clarified later that by “biblical,” he specifically meant the Christian New Testament.

“As long as they have that worldview, then they’ll be a good judge,” Whitaker said on the panel. “And if they have a secular worldview, where this is all we have here on earth, then I’m going to be very concerned about how they judge.”

Whitaker does not appear to have rescinded or corrected his 2014 statements, which were uploaded to the internet by People for the American Way, which runs the liberal media site Right Wing Watch.

The Department of Justice did not respond to a HuffPost request for comment.

The eclectic group of 22 organizations that signed the statement opposing Whitaker included prominent national groups, such as Americans United for Separation of Church and State, NETWORK Lobby for Catholic Social Justice, and Bend the Arc Jewish Action. One religious denomination, the Unitarian Universalist Association, also signed. One of the signatories was African American Ministers in Action, which is part of People for the American Way.

The religious and secular leaders claimed in their letter that the views Whitaker expressed on the panel were “clearly hostile to religious freedom, the Constitution, and the rule of law.”

Rachel Laser, president of Americans United for Separation of Church and State, said in a statement that she believes Whitaker’s views violate both the First Amendment and Article VI of the Constitution, which promises that no government officials be subjected to a religious test.

“The Attorney General of the United States is sworn to uphold the Constitution, but Whitaker clearly is not up to the task,” Laser said. “As a Jewish woman, an attorney and an advocate for church-state separation, I cannot trust that Whitaker would protect our fundamental rights.”