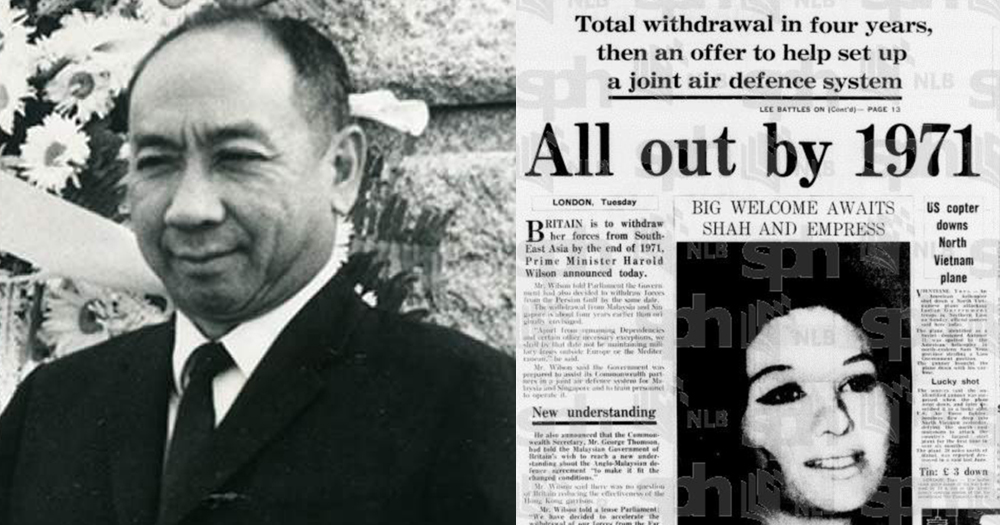 The Budget is usually a good indicator of the priorities of a society at a particular time.

In 1965, our new nation’s priority was to industrialise to sustain a population that could no longer depend solely on entrepôt trade.

In 1967, the big ticket event that influenced Budget was the planned withdrawal of British troops from Singapore by 1971.

Then Minister for finance Goh Keng Swee delivered his on Dec. 5, 1967.

In July earlier that year, Britain announced that they would be withdrawing their troops from Singapore.

The worsening economy back home meant the British could not afford the £70 million-a-year maintenance of British military bases here.

It might not seem like a big deal, but the presence of British military here in Singapore contributed to 20 percent of Gross National Product and their military bases employed many local civilians and personnel.

To understand just how many, below is a table from Goh’s  detailing how many locally-employed civilians were hired, as the British gradually withdrew their troops from Singapore from 1967 to 1971.

. NAAFI refers to the British Navy, Army and Air Force Institutes. MPBW refers to the Ministry of Public and Building Works under the UK government in Singapore. AKC refers to the Army Kinema Corporation, a unit set up by the British War Office to provide entertainment for their troops stationed here. Think of it as the UK’s version of SAF’s Music & Drama Company.

Spending by British military personnel and their families, as well as expenditure on local goods and services amounted to S$450 million in 1966.

After 1971, we have to go through another test, perhaps a more exacting and rigorous test, and that is our survival potential as a separate political entity in a difficult and turbulent part of the world. If in the intervening years we have put to good account our resources in money, manpower, skills and organisation, I believe we shall pass the test of political survival as adequately as we are now passing the test of economic survival.

In Goh’s words, the problems caused by the withdrawal of British troops over three years would leave the country scrambling to compensate for the loss in British military expenditure and create 18,000 more jobs annually to provide for those who were expected to be retrenched.

The unemployment problems from the planned withdrawal of British military was expected to aggravate Singapore’s unemployment issue.

While the country had by then started to industrialise, the rate of job creation was not fast enough to support the influx of new working adults.

To remedy this, Goh suggested turning to tourism and focusing on “growth industries”, such as engineering and metal fabrication.

Both of them were expected to offset the direct and indirect expenditure losses from the run-down of the British bases.

The Budget is divided into two categories: Ordinary expenditure (which covers operational costs) and development expenditure (investment in infrastructure).

Of S$178 million devoted to development expenditure, the highest portion went to economic development, followed by defence and public administration, and then social development.

These measures were effective as demonstrate by Goh in his 1970 Budget statement — his final one as Finance minister — one year before the British formally pulled out from Singapore:

Expansion of trade and industry was more than enough to offset the modest reduction in British military expenditure. In 1967 this amounted to $489.9 million and it was reduced to $415.4 million by 1969. We should remember that as from now British military spending will be reduced at a much faster rate. Between 1967 and 1969, quite apart from expansion of manufacturing and trade, even the tourist trade increased sufficiently fast to offset the reduced British military spending, so that increased earnings on trade and industry virtually formed net additions to the domestic product