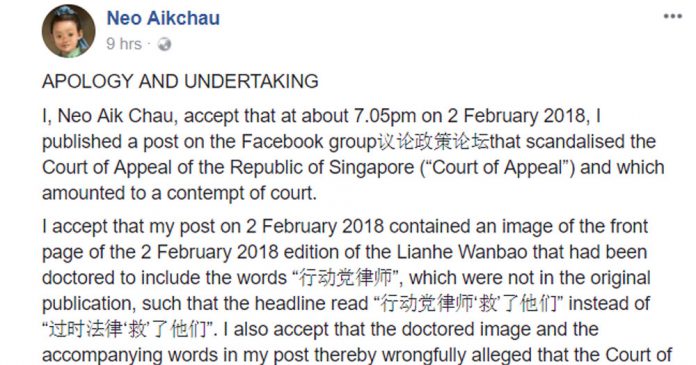 Man who doctored City Harvest headline complies with AGC’s demands; AGC may or may not take further action

The Attorney-General’s Chambers (AGC) confirmed in a statement yesterday that the netizen who doctored an image relating to the City Harvest Church trial has complied with its demands. It refused to comment, when asked, on whether it would take further action against the man, Facebook user Neo Aik Chau.

Neo apologised profusely earlier this week shortly after Law Minister K Shanmugam revealed in Parliament on Monday that the the Attorney-General’s Chambers is looking into the matter as a case of contempt by scandalising the courts.

The doctored image in question had to do with ruling party parliamentarian Edwin Tong, who also served as City Harvest Church founder Kong Hee’s defense lawyer. The man who created and circulated the image took a copy of Chinese daily Lianhe Wanbao’s front page that was originally entitled “Outdated law ‘saved’ the accused from harsher penalties” and changed it to “PAP lawyer ‘saved’ the accused from harsher penalties”.

Tsk, tsk apologies? my foot! can someone tell me that it's alright to slap someone and then apologize. Here there are two types of people. One genuinely regret while the other is a FAKE regret. You decide 🤔😎.