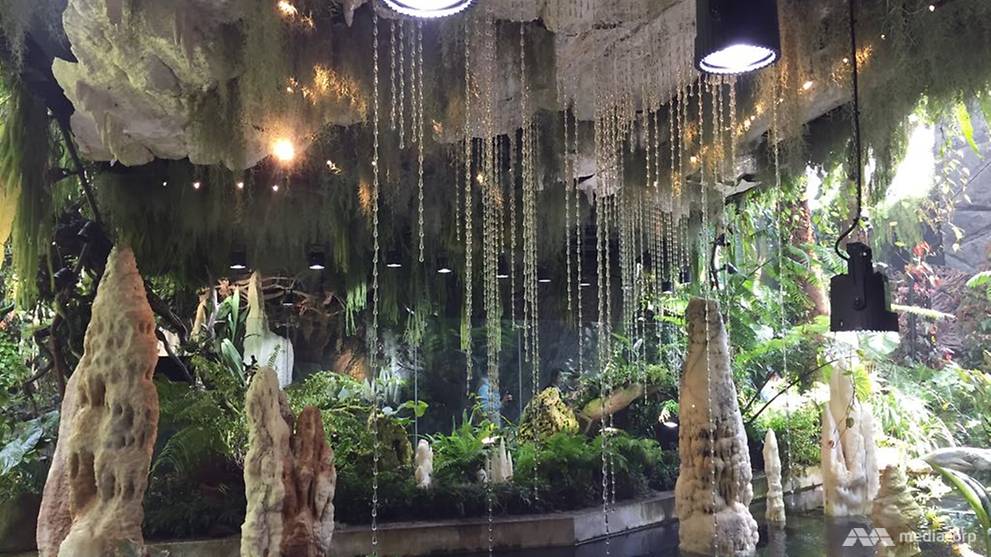 Real limestone formations have been brought in from China, with the largest weighing more than 1,800kg. (Photo: Fann Sim)

SINGAPORE: After nearly two years of improvement works, Cloud Forest, one of Gardens by the Bay’s two conservatories, opened on Friday (Dec 15) with three new enhancements.

This is the first time since the Gardens opened in 2012 that the Cloud Forest - which features a waterfall and more than 72,000 plants in a tropical clime - has undergone significant changes.

The conservatory's Secret Garden, Cloud Forest Gallery and Cloud Forest Theatre have all been refreshed with new exhibits.

The Secret Garden, called a “refugium garden” by Mr Tan Jiew Hoe, board director of Gardens by the Bay, is a sanctuary for plants that are endangered or close to extinction in the special environment of limestone forests and caves.

Gardens by the Bay said that the revamped Secret Garden at the base of the waterfall gives visitors a more immersive experience as they walk through the space, which features representations of limestone forests and caves.

As part of the enhancement works, more than 7,000 plants of more than 135 species and hybrids from the gesneriads, begonias, orchids and fern families have been added to its collection.

Lights have also been installed to give a more cave-like look when visited at night. Real limestone formations have also been brought in from China, with the largest weighing more than 1,800kg.

At the Cloud Forest Gallery, a new exhibit including a hologram featuring the “sixth extinction” about how human actions are causing a loss in biodiversity has replaced the previous exhibit on climate change.

A hologram that illustrates the ecologically-sensitive approach in building Gardens by the Bay. (Photo: Fann Sim)

In addition, a new video called Green World that explores how people can do their part to help nature towards a sustainable future has been added to the conservatory's Cloud Forest Theatre playlist.

“Cloud Forest is a place where hidden treasures are waiting to be discovered, be it plants with ancestry that can be traced to prehistoric times or orchids so tiny that you need to appreciate their beauty through a magnifying glass," said Mr Felix Loh, Gardens by the Bay's chief operating officer.

"The enhancements are part of our ethos to consistently offer something new, so that our visitor will come back again and again to re-discover the wonders of the plant kingdom."